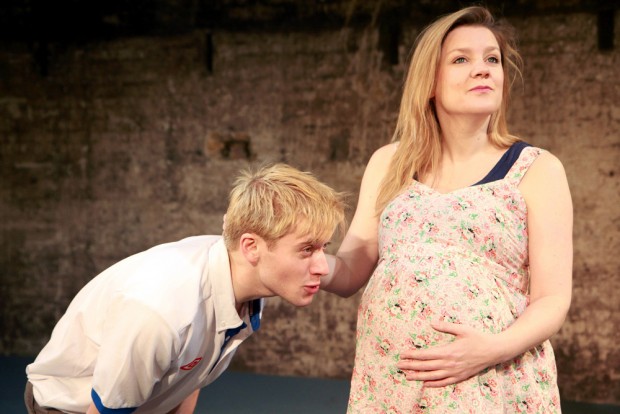 Polymath Philip Ridley is British theatre’s prince of imaginative writing. At the moment, he’s clearly on a roll, and this year his diary has been filing up fast. First, there was a majestic revival of his 1991 debut, The Pitchfork Disney, with a cast led by Chris New and the Channel 4 Misfits star Nathan Stewart-Jarrett, then there’s an upcoming London fringe revival of his 2005 shock-fest Mercury Fur and a national tour of Tender Napalm, his 2011 Southwark Playhouse hit, in May and June. And, glory of glories, tonight saw the opening of a brand new play, Shivered.

The story is set in the fictional Essex new town of Draylingstowe, which was built around a car plant run by the Japanese. Mikey is a car worker and trade unionist who’s married to Lyn (Olivia Poulet). The couple have two sons. As they grow up, the plant closes and town declines. The oldest son Alec, who has no opportunities to work locally, signs up to the army. The youngest son, Ryan, is born with deformed fingers; Mikey believes that this is due to the chemicals used in one of the paints at the plant.

Tragedy strikes. Alec is captured and then executed by jihadists; they post a video of the atrocity on the internet. The 12-year-old Ryan studiously avoids looking at it until he meets Jack, a mixed-race boy who has been the victim of bullying and who lives with his mum Evie, a single mother who has a problem with her weight. Although they are dissimilar — Ryan is a clever boy and Jack a bit dim — the two boys are drawn together. Because Ryan is obsessed with UFOs, and believes that his deformed hands are the result of alien contamination, the boys hunt for the monster of the canal and watch the skies.

Meanwhile, Lyn is devastated not only by the loss of her son Alec, but also by the loss of Mickey, who inexplicably leaves her. Then, at a local fairground, which like the rest of the town has known better days, she meets the twentysomething Gordy, a wideboy on the look out for sexual adventure and new ways of making money. They decide to meet in the derelict car factory, the same place where Ryan and Jack hang out. When Jack tires to force Ryan to watch a video of his brother’s death on his mobile phone, he sparks off a series of events that are tragic, grimly funny and maybe redemptive.

Put like this, the story seems reasonably straightforward. But instead of telling it chronologically, Ridley has taken this epic tale — which spans some 20 years in the lives of two families — and puts it through the mincer, carving it up into meaty lumps, which he rearranges into a series of bright but oozing fragments. The heightened emotions of the characters have shattered, or shivered, the linear narrative, and exposed all the pieces to our gaze, intrigued, appalled, voyeuristic.

Jumping from the past to the present, the story is presented in a fascinating and dazzling way. As in Moonfleece, Ridley is able to directly plug into the emotions of the 12-year-olds; as in Mercury Fur, he understands the family dynamics of brotherly love; as in The Pitchfork Disney, he is alive to the attractions of the fairground. But while he tells this new story with enormous flair and stunning control, he also lets his audiences hear the background howls of the weird and the wonderful.

In this play, we can see the Miraculous Evie and the Blessed Jack attempt to heal the sick and the lame. We can wonder about how the new digital media have destroyed our sense of the real; we can feel how the experience of war turns Alec into a truth-seeker. On the margins of our consciousness we glimpse big foxes, the face of Jesus appearing in a bruise, appalling accidents, freakish scenes and bizarre resurrections. The ashes of a cremated man explode over the world in a firework display. There’s a tender drawing lesson and, by contrast, some shocking incidents of violence. Sexual desire weaves like a snake through family life.

Directed with an impressive clarity by Russell Bolam, on Anthony Lamble’s bare set which uses the scratched brick wall of the theatre as a comment on industrial decay, Shivered is superbly cast and brilliantly performed. Olivia Poulet, familiar from The Thick of It, is by turns radiantly confident as well as glumly depressed as Lyn. Joseph Drake’s Ryan and Josh Williams’s Jack are both excellent, and Andrew Hawley’s charismatic Gordy commands the stage. With its pacy writing, confident storytelling and imaginative panache, this is a thrilling and disturbing new play that is unafraid to look into the abyss. One of Ridley’s very best.