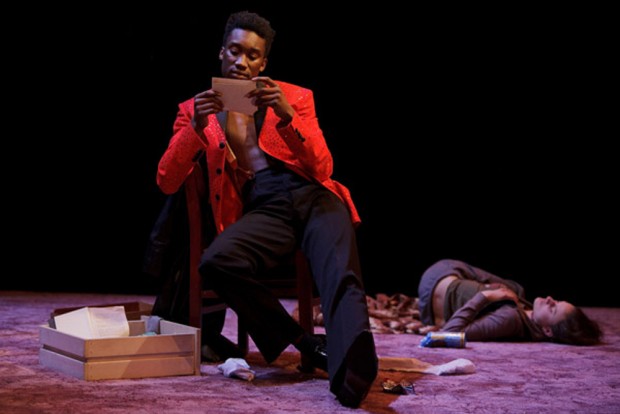 Critics can also be historians. And historians should reassess their view of the past. So now, in my opinion, the great new wave of 1990s British theatre starts not with Sarah Kane’s Blasted in 1995, nor with Mark Ravenhill’s Shopping and Fucking a year later, but with polymath Philip Ridley’s amazing debut, The Pitchfork Disney, in 1991. Today, with this long overdue revival which opened tonight, we get another chance to sample a powerful and imaginative drama in all its glittering and eerie strangeness.

Set in a dimly lit room in the East End of London, the play starts by showing the hermit-like existence of Presley and Haley Stray, a couple of 28-year-old twins who, since their parents died some 10 years ago, fantasise that they are only survivors of a nuclear holocaust. Rarely going out, they live on chocolate and on drops of the medicine their parents used to take, while telling each other stories about the outside world. But the stability of their chronically isolated existence is shattered when Presley spots the beautiful teenager Cosmo Disney in the street, and invites him in. Cosmo, a sequin-jacketed youngster who makes a living by eating live insects in a pub, brings a breath of streetwise wisdom with him, as well as his business associate, the hideously sinister Pitchfork Cavalier. Worse, Cosmo is drawn to the highly vulnerable Haley. Will he blast the universe of the childish twins apart?

Ridley’s playwriting is an enchanting mixture of mind-tickling fantasy and psychological realism, and the play showcases an enormously long monologue by Presley in which he invents the figure of the handsome but murderous Pitchfork Disney in an imaginary story that begins with a symbolic loss of teeth and climaxes with him destroying the world by unleashing a nuclear apocalypse, before finally ending up in invincible solitude: “I am the sole survivor.”

These kind of unchained narratives pepper a story which ranges over a bigger canvas, taking in sexual anxieties, sci-fi imaginings, acidic comments on social conformity — and convey a highly pleasurable sense of the uncanny. The atmosphere of eldritch gothic horror also holds a deep echo of the wider culture of fear. Ridley’s beautifully written text magically conjures up the crunch of insects being eaten alive, the sizzle of burning snakes and the howling of mad dogs on the rampage. Suddenly, theatre is no longer about journalism or soap opera, but about the hidden corners of the mind. You can easily see why the play is credited with rewriting the rules of playcraft.

The Pitchfork Disney also suggests feelings of incestuous love, abandonment by parents and throbs with the sound of taboos being cracked open. It is both hilarious and excruciating, and the power games between the four characters offer a thrilling evening in the theatre. All this is brilliantly realised in Edward Dick’s powerful and intelligent production, which brings out the hilarity as well as the emotional depths of the drama. It is designed by Bob Bailey and has a really cracking cast. Chris New’s Presley captures the character’s boyishness as well as his yearning manhood, while Misfits star Nathan Stewart-Jarrett’s Cosmo is confident, strutting and dynamic. Mariah Gale’s Haley is a perfect mix of the infantile and the aggressive, while Steve Guadino’s Pitchfork is effortlessly monstrous. I left the theatre convinced that I’d seen a work of genius immaculately performed. Wonderful.