Scenes from an Execution, National Theatre 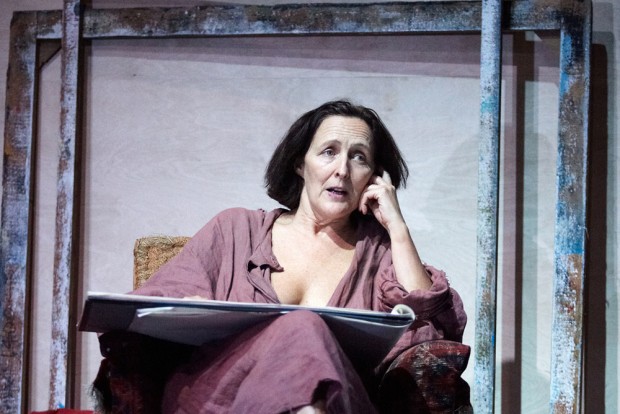 Walkouts are always intriguing. When audience members leave before the final curtain, it’s usually a sign that the play is too powerful, or too scandalous, or maybe just not very good. After reports that during previews many people aren’t returning after the interval in this revival of Howard Barker’s 1985 play, Scenes from an Execution, you have to wonder — is it the play or the production? Or is the National’s audience too conservative to appreciate this remarkable play?

Certainly, the drama is not just a soapy lite entertainment. It’s a hugely ambitious and intricately written story set in a highly artificial version of sixteenth-century Venice. Here, after the 1571 Battle of Lepanto, in which Christian Europe defeated the Muslim Ottomans, the Doge decides to celebrate the event by commissioning a triumphal painting. He chooses the female artist Galactia, played with enormous relish by Fiona Shaw, to do the honours and she responds by creating a work that denounces the carnage of war — think of Goya’s Disasters of War, Picasso’s Guernica, even of Tumbledown.

But if Galactia prefers protest to celebration, her younger lover Carpeta has no such instincts. He betrays his lover by taking over the project. But is he as good a painter as she is? And what do her daughters make of it all? So the play’s themes and ideas are splashed over a big canvas: what is the relationship between the artist and the patron? How do you square personal ambition with moral responsibility? Why do men do the dirty on women? Lots and lots of questions. There is also a strong vein of discussion about provocative art.

Barker’s plays are the theatre of extremes. Scenes from an Execution is hypnotic, hallucinatory, nightmarish, stuffed with ideas, naked emotions and psychological contradictions. It’s mental (in many senses). And it is rich. And in it the body is centre stage. The text reeks of sweat, the flesh steams, and it pours with blood, red, red, blood. Early on, a man with a crossbow bolt stuck in his head talks to Galactia — it is both appalling, and funny. It feels gloriously excessive. Extreme.

But no way is this a simple anti-war play. It is a drama about our fascination with death, the shock of new art, and big ideas drip all over the show: the emotions that artists feel about each other, about their funders, about their work. It’s an endlessly fascinating series of dialogues about how art is uncontrollable, and human beings perverse. It burns with disturbing and violent ideas. It is a thrillingly contemporary work of art, about art.

And Shaw’s performance is extraordinary. She is a fascinating mix of contradictions: passionate and offhand, ironic and engaged, seductive and stand-offish. She’s a lusty woman and a martyr. Even in her most languid moments, your eye is drawn to her. And your ear tunes into her fluting speeches. She exudes not only sex, but also a sense of death being confronted. She puts her body on the line. This Galactia is a universe of different sensibilities.

Compared to Shaw’s bravura performance, the rest of the cast seem rather tame. Jamie Ballard’s Carpeta is rather mild and whiny; Tim McInnerny’s Doge is dignified and suave. None of the others are memorable. It’s really Shaw’s show. By the second half of the evening, Tom Cairns’s production seems to get bogged down in some lagoon, and begins to meander. Because of Hildegard Bechtler’s design, whose reds and yellows evoke Venice, it looks good, but it lacks pace and intensity.

On press night, there was an unexpected moment of excitement when the elaborate stage machinery ground to a halt, leaving Shaw and two other actors suspended literally in mid-air. There was then a gap of a few minutes before the action got underway again. However, I doubt if this can be relied on to bring similar thrills to audiences every night. In the end, the play is better than the production, and Barker’s work remains emotionally true, poetic psychologically and full of startling insights. No need to leave at the interval. Although I’m sure that some people will.