Run the Beast Down, Finborough Theatre 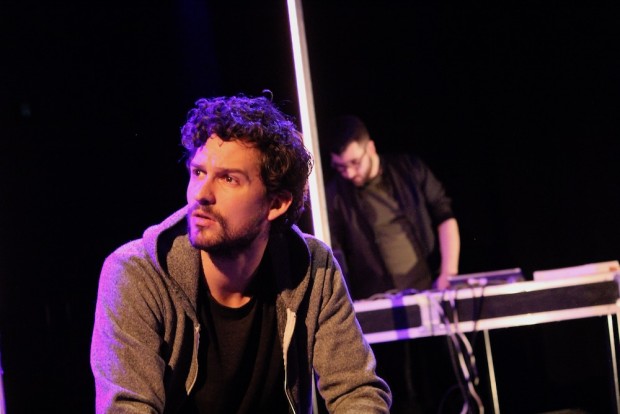 Let us all praise the Finborough. This tiny fringe theatre, located above a former pub in Earls Court, has been run by Neil McPherson since 1999. With a programme which mixes rediscoveries of neglected classics, foreign plays and British new writing, it punches well above its weight on the London theatre scene. Although it’s unfunded and therefore sometimes has some pretty rudimentary production values, it often puts exciting and thought-provoking work on stage.

A good example is Titas Halder’s debut play, Run the Beast Down, which runs in rep with Carmen Nasr’s Dubailand. Run the Beast Down is a solo show in which actor Ben Aldridge performs a 90-minute monologue about Charlie, a young man who is in bad trouble. Although he’s respectably middle class, and mates with lots of similarly entitled bods, we meet him when he is sacked from his job as a City trader and dumped by his girlfriend. This sudden reversal in his fortunes precipitates a nervous breakdown with psychotic episodes following bouts of extreme sleeplessness. But this is not really a study of mental problems — it is more of a symbolic odyssey.

Living in Seven Sisters on an estate that is divided between council tenants and those who own their flats, Charlie becomes obsessed with the foxes whose screams he hears at night. At one point, Aldridge raises his head and screeches like the tormented animal his character is about to become. For although the foxes are vermin and, in the words of another tenant, Mrs Winter, should be eradicated, for Charlie they have a very personal meaning. When he was 11 years old, he encountered one of them, the King Fox, in the woods behind his garden. Now this vulpine memory begins to inhabit his mind: he seeks the fox, watches the fox, dreads the fox, hears about the fox visiting Alex, his ex, and finally fights the fox.

Partly a contemporary gothic tale, dripping with images of dismembered cats, howling night creatures and a burning city, and partly a political symbol-fest: feral council estate kids versus posh City boys in an anarchic free-market tumble. Along the way of this journey into inner darkness there are rogue traders, market traders, rough nights out, rough nights in, and echoes of betrayal and loneliness. Fantasies about survivalism enhance the episodes of crime and public disorder. It’s like a nightmare vision of a world out of control, where humans become animal and some animals almost human. But the problem is that Halder’s storytelling is so heavy with detail, with incident and with symbolism that the effect is bewildering and obscure. He is making so many points that you can’t be sure what his point is.

Director Hannah Price, of Theatre Uncut, makes this overlong and overwritten piece initially exciting by introducing a live DJ, Chris Bartholomew, whose throbbing music is a slick companion to Halder’s febrile words. Likewise, Anthony Lamble’s platform staging, with Rob Mills and Robbie Butler’s neon rods radiating calm blues or feverish orange, help Aldridge, who prowls the stage, animating all of the characters in this riot-torn and panoramic state-of-the-nation mini-epic. As he chalks the play’s seven chapter headings on the floor, and grapples with the animal within, it’s hard not to be impressed, although the effect is also wearying. Still, the sheer craziness and intensity of Halder’s imaginative vision suggests that he has a real future as a playwright.