Home » Blog » About Money: The Gameshow

About Money: The Gameshow 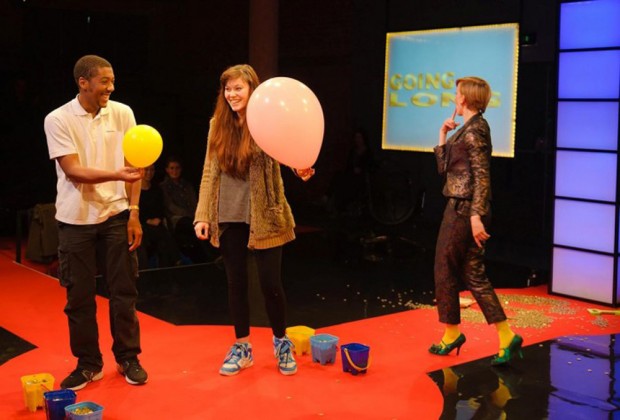 Yesterday found me at the Bush Theatre, watching Clare Duffy’s Money: The Gameshow, which asks several pertinent questions about global capitalism. And, because the show is well tuned into contemporary reality, its form is that of a television extravaganza, complete with flashing lights, dramatic music and competing teams. The two comperes, Casino and Queenie, introduce themselves in the bar of the theatre, where the audience assembles, as former traders who are now performance artists. They then lead the audience, which is divided by ticket number into two teams, into the theatre. Here the two sides must compete against each other, while Casino and Queenie bet money on the outcome. Yes, audience participation is required. It’s not the most original metaphor for the casino economy, or for the risks involved in banking, but Brian Ferguson and Lucy Ellinson are personable guides to this quick journey through the recent financial meltdown. The main gimmick is that some £10,000 in real pound coins is piled in a heap on the stage — and this is used for the bets. A beefy security guard diligently watches the show. Or, rather, the audience. On the evening that I went, a blindfolded volunteer was a bit upset because he had failed to start the race on the whistle, thinking it was not his turn. But, actually, since our team had bet on the opposing side, his failure was our success. This deft and rather random illustration of the irrationality of the market also hints at the system’s ruthlessness. So although everyone loves a game show, in the real world the financial crash has resulted in austerity for all but the richest, declining standards of living and cuts in social care and services. That’s a lot less entertaining. It’s just not funny. Also, although Money: The Gameshow is good at reproducing some of the mass hysteria of financial market traders, the process gets a bit wearisome after two hours.