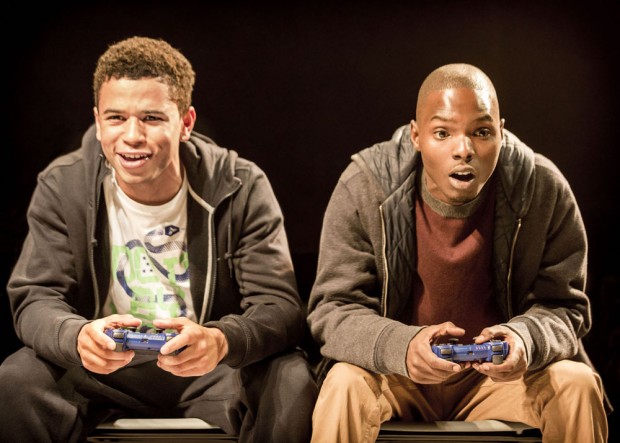 You could call it the iceberg syndrome. It’s a work of art that is a flash, a sliver or an imprint: think of a passport photograph, a cheap trinket or a half-finished graffiti. Yet beneath the simple image there is a world of pain. Rachel De-lahay’s new play, a follow up to her award-winning The Westbridge, offers snapshots of the great migrations of recent years, and slowly reveals the raw emotion of these simple tales.

Routes looks at two journeys. It opens with a scene set in Nigeria in which Femi, a fortysomething Nigerian man who used to live in London but has been deported back to Lagos, is buying a new identity in order to travel back to the UK. The second scene shows Kola, a mixed race youngster who now has to share his hostel room with Bashir, a Somali-born teenager who has lost his parents and whose immigration status is dodgy.

In the lives of these two young men are two white women. When Bashir is picked up on a legal technicality which threatens his “leave to remain”, he meets Anka, a liberal volunteer worker who specialises in helping the victims of inhumane immigration rules and who campaigns to have them changed. In fact, Bashir’s case is particularly Kafkaesque: he’s been living in the UK since he was a baby, but technically he is not a citizen. On his 18th birthday, he faces deportation. The other woman is Lisa, Femi’s mother, who in a neatly symmetrical twist works for the Border Agency. Their relationship is under strain because her son has behaved violently towards her.

With rapid strokes De-lahay sketches out a street culture of drugs, domestic tension and teenage friendship. In the scenes between the two boys, her writing reeks of deep-fried chicken, overheating consoles and heavy weed. The dialogues are quick, and the characters rapidly drawn. It’s sharp, funny and realistic. But under the jokey surface of the boys’ talk there is an emotional void. Both crave love, both need mothers, both long for a home. Their relationships with older women — Lisa and Anka — show how immature and needy they both are. This is a play about lost boys, and longings almost too deep for words. Suddenly, “love” seems like too ordinary a word. As a counterpoint, Femi’s journey to London is a voyage to recover his wife, his kids, and, yes, his home.

Although it only lasts 70 minutes, the play conjures up a picture of homelessness; it’s an almost existential cry for belonging. It also shows a multicultural Britain divided by the stresses of different street cultures, by the gap between middle-aged women who work and young men who drift, by the strong and the weak, the safe and the insecure. Meanwhile, in Nigeria the meeting places hum and buzz with the buying and selling of illegal identities, with prices that rise on a whim and ever new bribes that need to be paid.

Routes is a slender play, but it has an acutely contemporary edge. In Nigeria, Abiola — the agent who is arranging Femi’s passage to London — points out that while Nigeria is thriving, England is sinking: why would anyone in their right mind want to go there? Femi, of course, is returning to the home of family, but you can see Abiola’s point. Meanwhile, the cityscape of the UK’s metropolis — with its dead Zone 6, fast-food outlets and unjust immigration rules — is rendered with economy and instantly recognisable.

Staged at this venue’s upstairs studio space, on designer Paul Wills’s versatile set, whose zippy neon lighting suggests endless institutional corridors or the wings of planes, the play is directed with energy by Simon Godwin. Fiston Barek and Calvin Demba bring out the contrasts and similiarities of Bashir and Kola, while Peter Bankolé and Seun Shote give life to Femi and Abiola. Equally impressive are Anamaria Marinca and Claire Lams as Anka and Lisa. An evening that is brisk but finally very painful.