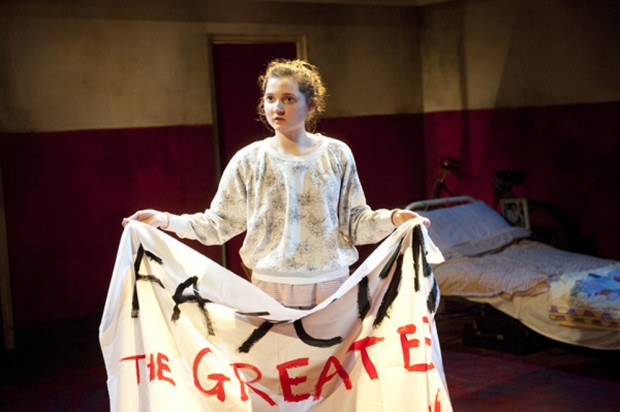 British theatre is a bit phobic about travel: you can see plenty of plays set in leafy suburbs, grotty council estates and occasionally in muddy fields, but few that enjoy an overseas setting. And when the Brits do go abroad, they usually follow the well-trodden paths to Africa, the Middle East and north America. But the Royal Court has a different agenda: it works with playwrights abroad and brings their work to Sloane Square so there’s no need to get a visa to experience life in today’s Latvia, as shown in Aleksey Scherbak’s powerful new play, which opened tonight.

The political background is vital to the drama, so pay attention: during the Second World War, the small Baltic state of Latvia was threatened by its two big neighbours, Nazi Germany and Soviet Russia. In fact, when these countries signed the Molotov-Ribbentrop Pact in 1939, this document included a secret clause which put Latvia in Russia’s “sphere of influence”. Soon after, Soviet troops occupied the country, only to be chucked out when the Nazis invaded in 1941. Then the Soviets returned at the end of the war, and some Latvians joined the Germans in fighting to keep them out. After the war, huge numbers of Russians settled in the country.

Set in Riga, Remembrance Day begins on the eve of 16 March, Latvian Legion Day, when native Latvians commemorate those who fought against the Soviets, even if that meant fighting for Hitler. Young Anya, whose parents — Sasha and Sveta — are ethnic Russians, prepares to go on her first anti-fascist demo. To make sure that she keeps out of trouble, Sasha follows her and then gives an impromptu interview to a pro-Russian television channel, sensibly suggesting that everyone should forgive and forget. For his community, however, this is tantamount to treason.

Sharing the same landing in the block of flats with this family is their Uncle Misha, a Russian veteran of the Second World War, plus two other elderly men, Paulis and Valdis, two Latvians who were in Hitler’s Waffen SS. Added to this conflictual scenario is Anya’s older brother, Lyosha, who doesn’t want anything to do with politics, and Boris, a party activist who delights in stirring up trouble — after all, he wants to make a career in politics.

Like the armies which once crisscrossed this hapless land, the arguments go back and forth for all of the play’s 90 minutes. The old Nazi veterans muse about how they have become symbols of national pride and independence; Anya’s granddad Misha is similarly proud of the Latvians he once killed during the war. But Anya’s passion to fight both the old Nazis and their younger supporters, and to combat social injustice, clashes with her father’s desire to be humanistic — and with Boris’s opportunism.

Michael Longhurst’s fluid production makes good use of Tom Scutt’s versatile set, but can’t do much with Rory Mullarkey’s rather plain translation of Scherbak’s text. Sadly, the play’s virtues — the passion of its account of cultural conflict and the speed of the escalation from normalcy to crisis — are undermined by its overly schematic feel: ideas are valued more highly than character. Anya’s rapid radicalisation, and her speedy transformation into a fanatic, is powerfully shown, yet the play’s ending feels perfunctory.

Scherbak’s rather humourless tale is livened up by some vivid performances, which include Ruby Bentall’s shrill and emotional Anya, Michael Nardone’s self-justifying Sasha and Michelle Fairley’s bewildered and angry Sveta. Equally important to the panorama are the old men: Struan Rodger’s emphysemic Uncle Misha, Ewan Hooper’s reasonable Valdis and Sam Kelly’s blinkered Paulis. Luke Norris’s cynical and manipulative Boris is also good. Although the play shows clearly how history hangs like a nightmare on the minds of the living, it is too slight to engage either the intellect or the emotions.