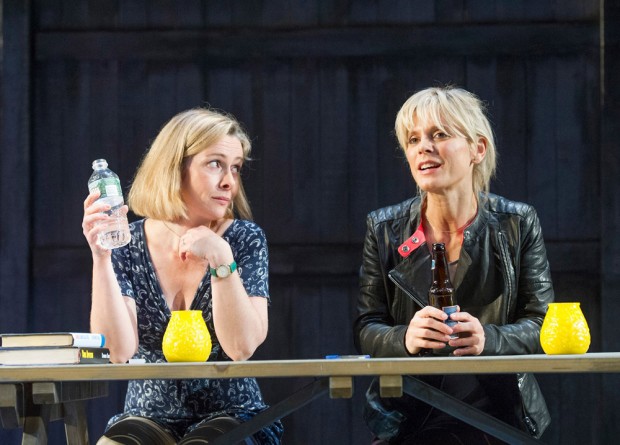 Feminism suddenly seems to be all the rage in London theatre. Yesterday, I reviewed Nick Payne’s Blurred Lines, and tonight I saw this show by American provocateur Gina Gionfriddo, whose Becky Shaw was at the Almeida three years ago. This current piece is a light comedy, with some good bright lines, an entertainment that takes several pauses in which ideas are expounded and discussed. It feels a bit like being back in college: a mix of laughs and study.

The set-up has an admirable clarity: two former college room-mates meet up again after some two decades apart. Catherine is now a hot academic who enjoys a brilliant career, but has never married. Gwen is a stay-at-home mum, who regrets never having completed her studies. The grist in the mill is Don, Gwen’s rather lame husband, who was originally Catherine’s boyfriend. But while Catherine used to inspire his ambitions, Gwen’s domesticity has just dampened his ardour. Catherine has come back to her New England hometown because her mum, Alice, has been unwell. When she decides to spend her spare time teaching a summer-school course, she only attracts two students: Gwen and Avery, who is Gwen and Don’s young babysitter. In an informal style, Catherine teaches her course on feminism in her mum’s house.

This allows the audience to watch four generations of women — the older Alice, the 1980s generation of Catherine and Gwen, and the young Avery — debate the politics of having it all, or not. And I do mean debate. On one level, this is a comedy which has plenty of good laughs; on another, it is a seminar class about ideas. You pay your money and you get to hear about women’s life choices, the need for a career, the desire for love and to make up for past mistakes, the consolations of family, and a girl’s love for her mum.

Gionfriddo’s text has very little individual character, but it does have a very impressive clarity and zest in its presentation of ideas. At the same time, she does insist on spelling everything out and those who love subtlety will be exasperated by this show. Most human urges — lust, hate, revenge — inevitably surface, but their representation is much less compelling than the battle of ideas.

In an entertainment like this, the joy is in the contrasts: the serene femininity of Alice is juxtaposed with Catherine’s intellectual brightness, while Gwen’s homely honesty is always outpaced by Avery’s punky spirit. Unfortunately, everyone is well behaved, and the story progresses in a rather predictable way, before taking a couple of less expected swerves. But by the end, you long for an explosion of hatred, a spasm of viciousness, a splash of blood. It never comes.

Still, Gionfriddo does articulate ideas about pornography, degradation and personal ambition in an interesting way. Although we never get beneath the skins of these women, Peter Dubois’s production is efficient and well paced. Emilia Fox, familiar from Silent Witness, is attractively radiant as Catherine, while Emma Fielding’s Gwen is best when she gets angry. Polly Adams is a calm Alice while Shannon Tarbet’s feisty Avery is a joy. With its bitter-sweet ending, the final word is that of a new generation. But I’m still waiting for a play that really articulates the new feminist sensibility.