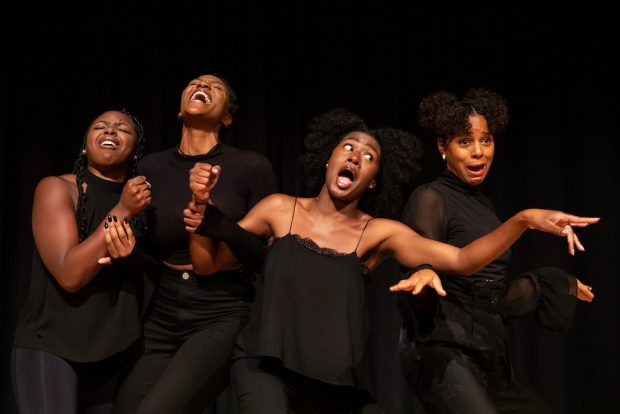 Black women often find themselves subject to a double dose of prejudice. Pressure. They face everyday racism as well as sexism. It’s called misogynoir, and Queens of Sheba is a short show dedicated to calling it out. In as joyous and energetic way as possible. First staged in 2018, and subsequently revived several times nationwide, Jessica L Hagen’s debut play has been adapted by Ryan Calais Cameron and now visits the Soho Theatre in London.

The show was loosely inspired by a particularly grotesque incident which happened in September 2015, when two women from a group of four were turned away from the Dstrkt nightclub in Soho for being “too dark” and “overweight”. The club, which boasts of being popular with A-listers such as Kim Kardashian, Jay Z, Will Smith and Justin Bieber, was then picketed by protesters after a media campaign with the hashtag #DoILookDstrkt? Although this incident is not central to Queens of Sheba, the outrage it sparks does provide the emotional fuel of the show.

It starts real quiet. A young black woman (Eshe Asante) looks into a mirror, and she is not happy with what she sees. She feels that some people think that her skin is too dark, her nose the wrong shape and her lips ditto. Maybe her hair is too curly, or not curly enough. Whatever it is it pains her. She is mute, but visibly upset. Then, as if to cheer her up, the other three cast members — Tosin Alabi, Kokoma Kwakua and Elisha Robin — storm onto the stage, and they all belt out Aretha Franklin’s “Respect”, the battle hymn of self-worth.

The four regal women then perform three scenarios, which are satires on situations that will be immediately recognizable if you are a black woman. At work, they tell us about how they feel during interviews, and how white work colleagues treat them in the office. How their names might be anglicised; how they might be given nicknames (without their permission); how they might be ignored; how white people might want to touch their hair; how they get patronized or suffer countless micro-aggressions. How they regularly get asked where they are “from”, or rather “from, from”, as in “originally”. At all times, they have to “nod and smile” — and putting up with all this is more exhausting than the work itself.

After more music, including such inspiring songs as Diana Ross’s “Ain’t No Mountain High Enough”, the next scenario is all about dating white guys. Like the previous exchanges, the satire is bright and forceful: one queen says, “I contemplate how he will wear me”, and all of them skewer white men who insist on seeing a black girlfriend as an “exotic” creature that they can show off to their liberal friends, while at the same time thinking that using the N-word is a sign of their street cred. And who really don’t get it when it comes to the hair.

After some more sweet soul music comes perhaps the funniest and most hard-hitting part of the show. The queens enact several scenes from their experience of encounters with black men. Using a gutsy parodic style, they mimic the postures and chat-up lines of swaggering and invasive guys, who prowl across the nightclub floor, swinging their arms like a rap gangsta or cradling their balls like god’s gift to women. On the serious side, there’s the repeated chant of “I am in love with my abuser,” and some beautiful mockery of the twerkable songs that call all women “hoes”.

The early life cycle of the black woman, loaded with expectations from childhood about being sassy, strong and sexy, is powerfully staged. The cruel effect that these imposed images have on female psychology, creating self-doubt and paranoia, is likewise shown as having a harmful effect on the body, which is stared at, watched over, abused and made uncomfortable. At several moments the stage radiates a palpable pain: these experiences hurt; to live like this is an experience of hurt.

Queens of Sheba mixes poetry, singing and satire to build up a strong picture of the realities of the black female experience. Hagen and Cameron are part of Nouveau Riche, a group dedicated to producing art that is both educational and entertaining. In this show, which is directed by Jessica Kaliisa on a bare black-curtained stage, the energy and intelligence of the parodies and pointed putdowns demonstrate the success of this mission. I particularly like some of the repeated lines, such as “They ask me where I am from! I say I am a mix. Of both racism and sexism — they lay equally on my skin. Passed down unknowingly by my next of kin.”

If it is depressing that, in the 21st century, we still need to be reminded that stereotypes about black women — that they are too dark, too loud, too different — need to be contested, the response of the audience is testimony to the play’s truths and to the deep joy in hearing its criticisms articulated. You want to know more about the sisterhood? — well, here you are! Even if much of the material is unsurprising, and the 55-minute running time a bit too short, the performance is delivered with passion, precision and pace. And yes, black is beautiful!