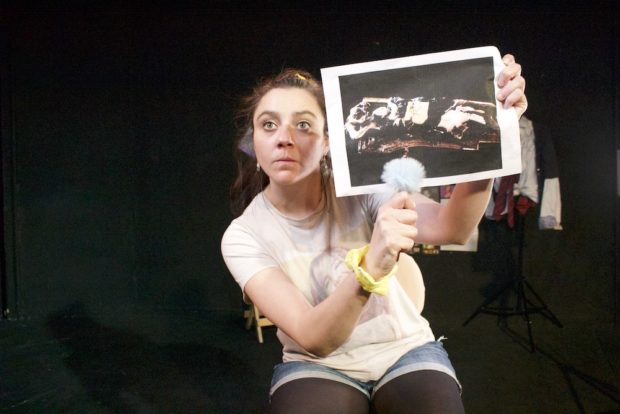 Uncertainty can sometimes provoke creativity. When the opening of Shereen Roushbaiani’s one-woman show, Saving Britney, at the Old Red Lion theatre was cancelled in January, its creators David Shopland and Roushbaiani, put together this online performance as a kind of taster for the live show, which now opens in May. It’s about thirtysomething Britney Spears superfan Jean, one of the moderators on the Britney Spears UK Facebook Group, who is offering an exclusive Facebook Live session digitally via the Old Red Lion Theatre website. Over some 50 minutes, starting with a riff on Romeo and Jules (yes!) which features improvised shadow puppets, she discusses the celebrity life and cruel times of the pop star. Think Framing Britney Spears mixed with #FreeBritney and #MeToo. In front of backdrop of pictures, collages and a timeline, Jean analyses both song lyrics and her heroine’s relationships. The writing immediately grabs you, and both gives your your brain cells a shake and ruffles your neglected lockdown hair. Between paparazzi flash and psychological insight, Roushbaiani’s performance is thoughtful, punky and fun. After giving a Tomb Raider guide to 2000s pop culture, she reveals a deeper side, some of the bile behind the glitz. The deliberately awkward moments, and the way that the Comments box rings with trolls and acolytes, gives a real sense of a contemporary exploration of the ever fascinating relationship between fan and star. Directed by Shopland for Fake Escape theatre company, this digital production is very well filmed by Charles Flint. Another Old Red Lion hit.