About The Protest: Black Lives Matter 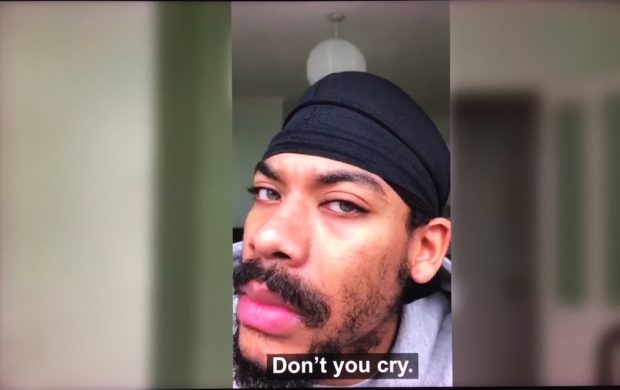 How can theatre respond to the racist shit that’s going down? The Bush Theatre answered this question by asking six black British artists to react in any way they liked to the killing of George Floyd and its impact on black Britons. The result is The Protest: Black Lives Matter, which is without doubt one of the very best things being streamed at the moment. Deeply personal, extremely immediate, these are reactions that are so deeply felt they are not really theatre in the conventional sense of fictions. But they are imaginative as well as spontaneous. Director Daniel Bailey, who curated the series, can exult in its variety of voices, and the way in which each contribution — ranging in length from a handful of minutes to slightly longer — is filmed in a different way and has such a sincerely personal quality. And the writing is uniformly brilliant. For me, the most intense is Black by Roy Williams, featuring Aaron Pierre, 70 seconds of visceral pain which, with enormous economy and insight, condenses many of the questions that people are asking along with the feelings of those that experience them.

The others, in no particular order, are Hey Kid by Matilda Ibini, a “bionic playwright and screenwriter”. This is an inspiringly original tour through a photo album in which a mother talks to images of a young black girl, presumably her daughter (or maybe an older to a younger self), advising her not to stay silent, not to try to please everybody (“smiling won’t always help”), but to find her own voice. It also has a lovely payoff line. Next up is You Just Don’t Get It — And It Hurts by Fehinti Balogun, an actor, theatre-maker and activist, a piece which takes the form of a series of real-time text messages, to a female friend called Chelsea, about an incident at a party, when most of the guest were white and sang along with the N-word in a rap song. He talks about her white privilege and how black people are blamed for spreading the virus whenever they demonstrate. As the texts get longer and longer, with auto-corrects and misspellings, his desire to explain what white privileged is and what racist oppression feels like becomes more and more powerful, and more desperate. Although the conflict is friendly, the debate sizzles at various points, especially as Chelsea doesn’t quite get it. And his book suggestions are great!

Singer, songwriter, actress and composer Anoushka Lucas performs Your Work, her song with piano accompaniment. It is a heartfelt piece about her anger, and how she feels since all her white friends are suddenly so solicitous and how everyone wants to help. She denounces the everyday racism she has experienced while understanding that, as a lighter-skinned black woman, she is at the “top of the ladder of oppression”. Her final plea to pay attention is very moving. “You do your work and I’ll do mine” is pretty good advice. Likewise, The Fire This Time by actor-musician Kalungi Ssebandeke (aka Kalungi Fresh), ft Anoushka Lucas, is a rap as strongly felt as the other contributions, about recent events, with film of past racist incidents, as well as current protest, inserted within the song. His repeated line “This time it’s the fire/ We’re not singing no more” alludes not only to James Baldwin, but also to the way the black presence in popular music both expresses anger and defuses it at the same time. The piece ends on a reminder that without justice there can be no peace.

Last but not least, Do You Hear Us Now? by British Congolese writer and theatre-maker Benedict Lombe, is a disarmingly calm talk in which she outlines her trauma and rage, and how this can be turned into something articulate, something poetic, something insightful, “something else”, which betrays the rawness of the real experience. With impressive precision and clarity, she goes on to ask: when things get harder, will people still show up to fight? Self-aware, and eloquent, she points out that nothing so far is “enough”. “Do You hear us now?” Well, do we? Like this venue’s Monday Monologues, whose excellent first one, Skype d8 — about playing the dating game while in isolation — by Travis Alabanza is finely performed by Ibinabo Jack, The Protest is full of originality in its various voices, its variety of filmic techniques, and its clenched feelings. Theatre is rarely so urgent, or so forceful.