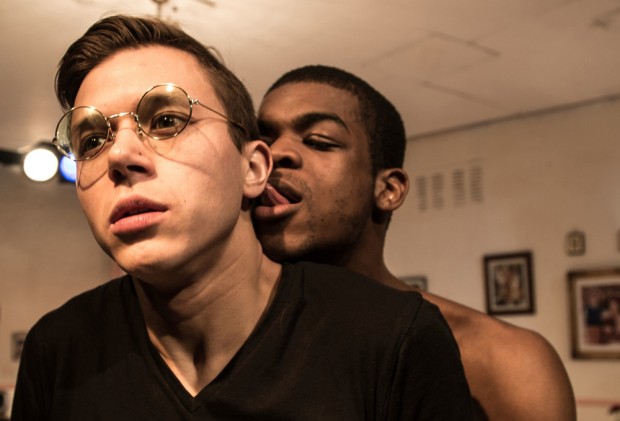 Like good wine, some plays improve with age. The first taste is sharp, and tickles the palate; further sips stimulate and impress, but the rich full flavour is only apparent after a few years in the cellar. Such is the case with Piranha Heights, Philip Ridley’s 2008 drama, which has been thrillingly revived by young director Max Barton at the Old Red Lion as the inaugural production of this fringe venue’s new artistic director, Stewart Pringle. As such, it feels like a compelling statement of intent.

Set in a top-floor flat of an East End tower block, the play begins as a domestic dispute between two fortysomething brothers, Alan and Terry. It is Mother’s Day but their mother has just died and the two men are arguing over who should live in her housing association property. But their dispute is soon complicated by two audacious swerves of the plot: first, the arrival of feral teen Medic and Lilly, a veiled girl who is apparently a Muslim war survivor. Second, the entry of Alan’s estranged and disturbed teenage son Garth.

Like Pinter on MDMA, these fresh arrivals fling a dose of energetic unpredictability into the story, which quickly explodes into a splatter of wild fantasy in which a variety of competing versions of reality rush headlong at each other. But, just when collision seems inevitable, Ridley expertly steers the game onto another, even more outlandish terrain. So Alan and Terry’s disagreements over what really happened in their childhoods spawn a grosser, more disturbing vision of teenage discontent.

What so impressive about Ridley’s writing is his stupendous imaginative range – the play is a mash-up of eclectic cultural references, from Beckett to Pinocchio, from Islam to Elvis, and from Spider Man to beheading videos – that mixes brutal cruelty with moments of sheer poetic bliss. Here the different genres of domestic drama, teen angst, sci-fi, horror and alternative reality mingle in a beautiful and powerful promiscuity. When the play premiered at the Soho Theatre in 2008, the disturbing material about decapitation seemed a touch outlandish – now it is the stuff of daily news broadcasts and widespread anxiety.

As well as being visionary, the writing style of Piranha Heights also anticipated, by almost a decade, more recent examples of surreal eclecticism, such as Alistair McDowall’s Pomona and Rory Mullarkey’s The Wolf from the Door. But although the imaginary element of Ridley’s play is often outrageously extreme, it is always firmly grounded in the emotional truth of character. Each of Ridley’s creations is both highly individual in their neediness, and at the same time symbolic of wider social problems.

The third in Philip Ridley’s informal trilogy of plays on the theme of brotherly love (the other two are Mercury Fur and Leaves of Glass), the play is an ambitious choice for any small venue and Max Barton’s terrific production positively glows with a febrile intensity which, at the show’s climax, had me quaking in my seat. Using the limited resources of this small pub venue, he nevertheless creates an unforgettably thrilling experience. Whenever I close my eyes I can still see the bright colours of the final scenes, designed by Cécile Trémolières, and hear the wind howling outside as the universe invades the flat. Magic. But there’s humour as well as provocation and wildness in this piece, and Barton explores both aspects of the work.

Barton’s cast is both enthusiastic and convincing. Alex Lowe (Alan) and Phil Cheadle (Terry) are the very different argumentative brothers while Rebecca Boey is the baby-cuddling Lilly, Ryan Gerald the hyper Medic and Jassa Ahluwalia the astonishing Garth. Although purists might object that the interval is a needless interruption to the story’s particular tempo, this is still a hot, hot, hot evening. And it remains true that plays such as this inject a real revivifying energy into the moribund naturalism that still hangs over the new writing scene. Hopefully, Pringle will stage some more of these gems. Shine on you crazy diamonds.