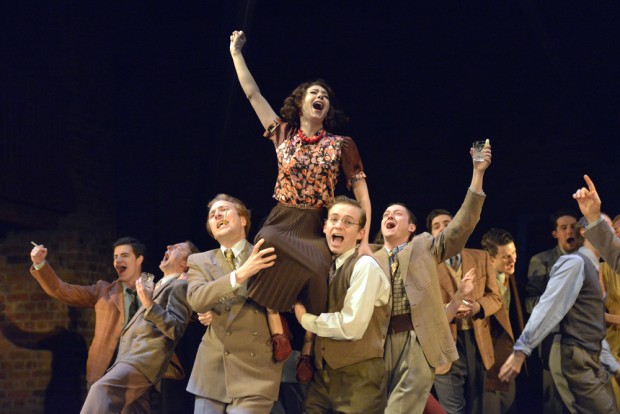 Are we stumbling into a new nuclear age? On the far side of Europe, the posturing of Russia’s Vladimir Putin is a reminder of the old fears of Mutually Assured Destruction (MAD indeed) during the Cold War. Nearer home, mainstream politicians all agree on renewing the Trident nuclear defence system, whatever the cost. Although the possibility of annihilation isn’t imminent, talk of atomic weapons is constantly in the air. So the story of how the bomb was invented, by the theoretical physicist J Robert Oppenheimer and his Manhattan Project team, seems of more than historic interest.

Tom Morton-Smith’s new play for the Royal Shakespeare Company, which opened at Stratford-upon-Avon in January and has now exploded in the West End, tells the complex story with enormous theatrical flair. Starting in 1934, the play begins with Oppenheimer, aka Oppie, telling his audience — students at a university lecture — that he expects us “to be attentive”. “I can make it clearer, but I cannot make it simpler.” We have been warned.

Next it’s 1939 and, as fascism spreads across Europe, Oppie and his friends in Berkeley, California, are holding a fundraiser for the relief effort in Spain. They are mostly members of the Communist Party, plus assorted other lefties, and they are united in their support of the Spanish Republicans against General Franco’s fascist forces. They even sing “The Internationale” — in French. When news breaks that two German chemists have discovered nuclear fission, the American scientists realise that unlocking the power of atomic particles could result in the creation of a horrifically powerful weapon. As Adolf Hitler makes a pact with Joseph Stalin and the Second World War begins, the Americans — headed by Oppie but also including often fractious colleagues such as Bob Serber, Haakon Chevalier and Edward Teller — start to explore the possibility of making an atomic bomb.

Angus Jackson’s fluid and entertaining production pictures the fun-loving American scientists, along with their women, having drink-fuelled dances, then suddenly switching to the serious business of research and development. Inevitably, the liberal sympathies of the scientists come into conflict with the more rightwing feelings of their military colleagues, who of course hate all pinkos. I hadn’t realised how many of Oppie’s family and friends were involved in the Communist Party, and how much distance he eventually had to put between himself and his old acquaintances. Without making too much fuss, the play asks questions such as: if you moderated your politics to help your career what would you do if a former comrade came to you asking for help?

Even more intense are the ethical issues thrown up by Oppie’s sex life. As well as getting married to botanist Kitty, he also sporadically pursues an affair with Jean Tatlock, an unrepentant Communist who is pictured as psychologically febrile. Much as I admire Morton-Smith’s play, these complicated conflicts of loyalty could have been more clearly expressed. No such doubts about Oppie’s rocky relationship with his physicist brother Frank, who gets a powerful scene in which he tries in vain to make him share the new scientific insights with other powers.

Is the play’s central character, Oppie, a tragic figure? Despite a compelling performance by John Heffernan, who portrays the chief as both charming and difficult, heroic and self-serving, I don’t think so. Sure, he expresses moral doubt, and says he feels “like I’ve left a loaded gun in a playground”, but I’m not confident that, despite this being a three-hour show, I can really say that I understood the man. He has appealing characteristics, such as his interest in Eastern religions, and less appealing ones, such as his entirely self-centred drive to succeed. Let’s just say that he is contradictory. Other similarly good performances come from Tom McCall and Ben Allen as two émigré scientists, one German, the other Hungarian, and from Michael Grady-Hall (Frank), Catherine Steadman (Jean), Thomasin Rand (Kitty) and William Gaminara (General Groves) in a cast that is almost as huge as the original project.

Jackson’s production, designed by Robert Innes Hopkins, is full of vitality, and he fills the stage with much movement and some memorable visual effects. These include the frantic scribbling of equations by the scientists, the video projects of sub-atomic particles and the final test explosion that turns into a wild party. If these visuals are entertaining, I felt that the use of a small boy in the Hiroshima episode was a bit cheesy, but the savagery of one verbal image of the bombing — a bird eating the burnt flesh of a scorched, dying horse — is especially hard to stomach. A good thing because that, in its way, is as searing as the WMD itself.