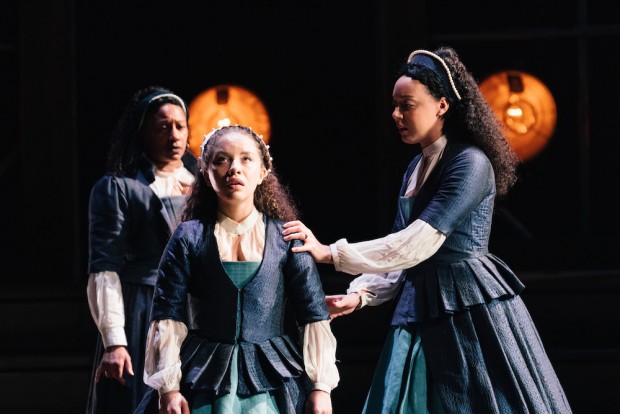 Emilia Bassano Lanier is not a household name. But maybe she should be. Born in 1569, she was one of the first women in England to publish a book of poetry. And she was also a religious thinker, a feminist and the founder of a school for girls. Oh, and a mother too. And maybe, just maybe, at a long stretch, she was also the “dark lady” of Shakespeare’s sonnets. Anyway, she’s a fascinating Elizabethan cypher and you can easily see why Morgan Lloyd Malcolm’s account of her life and times was such a hit when it opened at Shakespeare’s Globe last August. Now remounted in the West End, the play comes across as both shamelessly rousing and disappointingly crude.

Because not much is known about the real Emilia, this version of the experiences of a woman hidden from history gives a clear and uplifting sense of justice finally being done. But the scarcity of information about her means that Lloyd Malcolm has a free hand to create an uninhibited fantasy about gender in the Renaissance. With more than a wink at gender issues in the present. She starts from Bassano’s childhood, with the death of her father, an immigrant Venetian court musician. As the young child is taken under the wing of various powerful women, she soon becomes the mistress of the aged Lord Chamberlain, who gives her the freedom to develop her passion for education and for writing. Then, after she falls pregnant, she is married off to Alphonso Lanier and attains social respectability. But can she find an outlet for her literary ambitions?

As the prologue makes clear, however, history has not been kind to Emilia. Simon Forman, the Elizabethan astrologer, thought that she was basically just a loose woman, although in his diary he also records that she rejected his advances. What is clear is that Emilia does manage to publish her writings in 1611, and to this achievement Lloyd Malcolm daringly adds the suggestion that she was Shakespeare’s lover. This really is a stretch, to put it mildly. Even less convincingly, she likewise argues that the bard stole some of his best lines from this “dark lady”, a reference to her unconfirmed North African lineage. Admittedly, this is a fantasy life, so anything goes, and it is written as an uproarious comedy, full of blasts of female assertiveness and loud declarations of the need for change. Its targets are easy: male violence, social prejudice and sexist constraints.

Lloyd Malcolm uses Emilia as a general symbol of female independence, which is both emotionally powerful and full of heart. This life story is a metaphor for women today: find your voice and own your anger. But good intentions cannot disguise the plodding quality of much of the writing: it is not only clunky, but also creaky and clanking. There’s a real clash between Lloyd Malcolm’s writing and the quotations of real Renaissance poetry (which suddenly light up the stage). But it’s not enough: literary buffs should stay well away. In the best scenes — such as those between Emilia and Shakespeare, the washerwomen moments, the good-natured parodies of working-class creativity, the spiky catty chat and the migration jokes — there is a vitality that is often quite moving. But the rest, and there’s a lot of it, just plods.

The mixture of contemporary material, such as the vigorous disco dance sequences, with historical fantasy is grounded in familiar expressions of female experience, from maternity to sexual violence. As if that wasn’t enough, Lloyd Malcolm even brings in some witchcraft accusations. So although the play has been slimmed down from its original outing at Shakespeare’s Globe, and is now sleeker and faster, there is still a lot here to digest. But although the project’s warm advocacy of female empowerment is inspiring enough, and plays to its target audience of young women, the raw comedy is pretty banal and crude. Yes, it’s great to see such a large and diverse cast, with women — in a neat reversal of Elizabethan conventions — playing all of the male parts, but it is sad that the show is so didactic, obvious, vulgar and so frantically boisterous.

In Nicole Charles’s rather shouty and shamelessly militant production, three actors play Emilia at different stages of her life: Saffron Coomber (Emilia 1) is fiery and nimble; Adelle Leonce (2) is determined as well as distressed; and Clare Perkins (3) stately and commanding. I also like the performances of Charity Wakefield (Shakespeare), Jackie Clune (Lord Howard), Carolyn Pickles (Lord Chamberlain) and Amanda Wilkin (Alphonso). All concerned, as well as the ensemble, have a fun time. Joanna Scotcher’s set design evokes the Globe and a small band of musicians inject a lot of joy into the piece, mixing today’s music with that of the distant past. It’s an evening that can’t be accused of subtlety or insight, but it does deliver a rousing cheer for women’s emancipation.