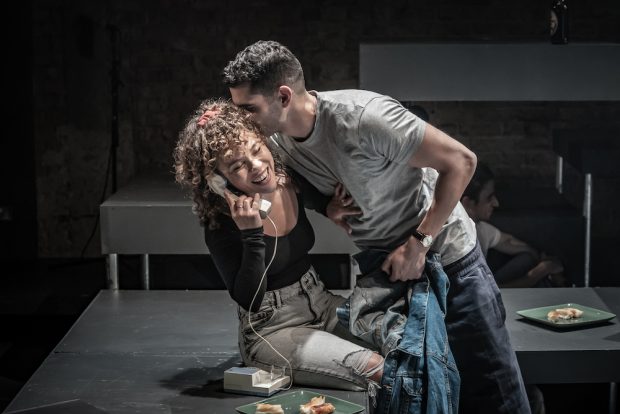 Is the Bosnian conflict of 1992–95 the war that Europe forgot? Maybe, although most fans of new writing for the British stage will remember its massacres as the inciting incident for Sarah Kane’s 1995 contemporary classic, Blasted. Certainly, this genocidal struggle in the heart of Europe not only etched its horror on everyone who heard about it, but also continues to inspire drama. The latest story, from British-Bosnian writer Igor Memic, is Old Bridge, which is also his debut. Well deserved winner of the 2020 Papatango New Writing Prize, the play is now getting a cracking production on the main stage at the Bush Theatre.

Set in Mostar, in Bosnia and Herzegovina, which in 1988 — when the action begins — is in the communist state of Yugoslavia, a relatively peaceful patchwork of different ethnicities and religions, the story starts with a dive. In front of the town’s population, there’s an annual diving contest in which hopefuls leap from the historic old bridge into the river below. Eek! This year the fearless jumpers include Mili, a muscular young Croatian who comes from Dubrovnik and is looking for a new life: he meets 18-year-old Mina and bam! the youngsters fall in love. Because he’s from a Catholic background and she’s a Muslim (although not a practising one) there’s a nice shade of Romeo and Juliet to this passionate rapport.

Memic brilliantly evokes a sense of place, describing Mostar’s old bridge — which, nerd note, has the same age as Shakespeare — as if it was a physical growth out of the stone on two sides of the town’s river and ravine; he not only pictures the diving contest as a heroic communal event, but also places the newcomer Mili among Mina’s best friends: the lively and strong-minded Leila and the irrepressibly provocative Sasha. Sasha’s tongue-in-cheek declaration that he is “a half-Catholic, one eighth German, Roma Jew with a Muslim great-great-something or other” describes the complexity of the religious and ethnic make-up of Mostar, where a mixture of different peoples could once share the same building.

But the tolerant party atmosphere of the opening passages, with their drinks and meze, is cruelly broken by the onset of civil war, which begins almost casually, as Yugoslavia disintegrates politically following the fall of the Berlin Wall. Then the fighting rapidly escalates. Memic shows the suddenness of the conflict, and its impact on daily life. Within a year, as the 50-year-old Muslim Emina remembers in the present, “one day all you care about is music, fashion, and boys — the next day there’s no food.” The horror of war is powerfully conveyed, and, by using two time periods (the early 1990s and today) Memic lets Emina, an often poetic narrator, plunge us back in time, back to anguish and anxiety.

If some moments are desperately moving, and almost unbearably sad, the story is also about resilience. The old bridge is destroyed during the war, but it is then rebuilt; as many people survive as are killed. So the terrible scenes, described panoramically in a cinematic way, of survivors searching for their loved ones, each clutching a photograph, are balanced by memories of fun times. There are good moments of humour. In the end, suggests Memic, if laughter can help you survive, then only words can set you free. And perhaps the cruellest fate is reserved for those trauma victims who cannot find a way to articulate their loss and longing. This is both emotionally intelligent and lovingly written — you really feel that the playwright, who left Mostar aged two, is telling his people’s story.

Memic’s text throbs with a real sensuous feeling for place: there are moments when your body tingles as his characters ask you to tread carefully, toes first and heel second, or when the jumpers’ feet tense or when characters run through broken glass in bare feet. At the same time, he reminds us of the psychology of war: how when one death provokes a day of tears, but each succeeding death is less strongly felt, until, a resonant metaphor in COVID times, you build up an immunity. He also uses everyday objects, such as an old watch, as potent metaphors of identity. There is not much journalism here, and you might want to consult wiki about the history of Mostar during the Bosnian conflict, but in its place is something better instead: a lot of deep experiential matter.

Director Selma Dimitrijevic, designer Oli Townsend and movement director Georgina Lamb, together create a compelling and emotionally true staging of this strongly felt narrative, highlighting the piece’s poetry as well as its horrors. The cast is excellent, with Dino Kelly and Saffron Coomber portraying Mili and Mina’s journey from lighthearted flirting to desperation under fire with enormous candour and conviction. Equally good are Rosie Gray (Leila) and Emilio Iannucci (Sasha), who similarly travel from cheekiness to trauma. Susan Lawson-Reynolds plays Emina — who as the grown-up Mina is the narrator and custodian of memory — with an engaging freshness.

The cast make all the characters both believable and relatable, reminding us that the Bosnian war, and all violent conflicts, are shocking intrusions into normal daily life, with its ciggies, coffees, shots, pop songs, hip T-shirts and sexual attraction. As Emina takes us by the hand to time travel to a more innocent past, the characters animate the flat platforms of the stage, which transform from fun playgrounds to claustrophobic hiding places. What were once irrelevant distinctions between Bosnians and Croats become a matter of life and death, and the ghosts of those we once knew remain in our minds in the present. Old Bridge is a wonderful mixture of beguiling reminiscence and vivid terror: a profound piece of writing — I loved it.