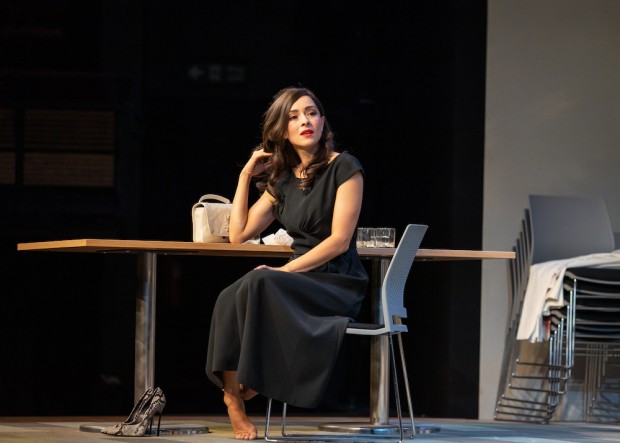 Are first ladies second-class citizens? Do they always have to stand behind their husbands? What are they really like as people? Questions such as these have inspired Irish playwright Nancy Harris to explore the relationship between two fictional first ladies, each of which bears an uncanny resemblance to a real-life figure. One is clearly based on Melania Trump, the other on Brigitte Trogneux, better known as Mrs Macron. As usual at the Bridge Theatre, the show is impeccably cast, with national treasure Zoë Wanamaker making her Bridge debut, joined by Zrinka Cvitešić, who returns to the London stage after her Olivier award-winning performance in Once.

Set on the Côte d’Azur in a parallel universe in which the United States is once again under attack from Islamist terrorists, with its president seeking support from France and the European powers for a strike against the Middle East, the play begins with a startling image: Sophie (Cvitešić), wife of the US president, arrives on stage — and she’s covered in blood. Vivid crimson on a pastel beige suit. Not her own blood, of course, but the result of a militant protest against her husband’s bellicose policies. By chance, in the same room of the large conference centre where the summit is taking place, is Helen (Wanamaker), wife of the French president and a stanch advocate of peaceful, diplomatic solutions. You know, jaw not war.

As their press officers, Sandy and Georges, fuss about security arrangements, and procuring a new dress to replace Sophie’s blood-splashed Chanel number, the two first ladies strike up an unexpected rapport. At the start there’s some tension, despite the achingly polite exchanges, and the politics of the piece are roughly sketched out. Sophie passionately supports her husband’s policy of visiting massive retribution on their country’s terrorist foes; by contrast, the more sarcastic Helen not only agrees with the French president’s much subtler approach, but seems to have had a hand in formulating his policy herself. But, Harris asks, does Sophie know something about the negotiations that Helen doesn’t?

Two Ladies is a crazy delight. It begins as a realistic drama, but it is soon apparent that Harris is more interested in playing with reality than simply representing it. At first, she asks us to compare her characters with the real-life first ladies on which they based, cheerfully changing Helen’s nationality from French to English (yet retaining many details of her romance with a much, much younger politician) while at the same time giving Sophie some touches of Melania (but soon adding some surprisingly new fictional details). Then the playwright gradually drops the satire and presents us with much more interesting and rounded characters. Suddenly, there is a swerve into an account of a terrible sexual assault, and, equally surprisingly, one of the press officers talks about their experience of racism.

But things do not remain sombre for long. Deciding that naturalism and social realism are not enough to contain her story, Harris finally takes another imaginative leap, pushing events into a place of surreal fantasy. Admittedly, it’s a sharp turn, and it almost throws me, but it works, it works. The plot takes on the colours of a feminist fable when the two women, both fed up with simply standing behind their man, decide to occupy centre stage. They plot to commit an act of protest that will change the world for ever. Suddenly, anything seems possible. Harris concludes that first ladies must in the end accept that their role is to wait, and this suggestion that, despite their exalted status, they are merely ladies in waiting seems perfectly apt. Yet it also comes with twist.

Bridge supremo Nicholas Hytner sympathetically directs this 100-minute chamber piece on a set that, as designed by Anna Fleischle, loudly proclaims its credentials of power and privilege. He gives his actors the space to explore their characters, underlining the differences — personal, cultural and political — between the two women. Both Cvitešić and Wanamaker emphasise the contrast between the emotionally expressive Croatian and the rather buttoned-up Brit with an enjoyable precision. When they get stressed, Sophie reacts by shouting, while Helen crumples on the floor. Hytner also gets great support from Yoli Fuller as Georges and Lorna Brown as Sandy. You leave the theatre full of admiration for the acting, and convinced of the truth of the play’s central message — that although it’s wrong to think of women just as victims, they usually do have it tough. Tougher than their men folk.