Off the Endz, Royal Court 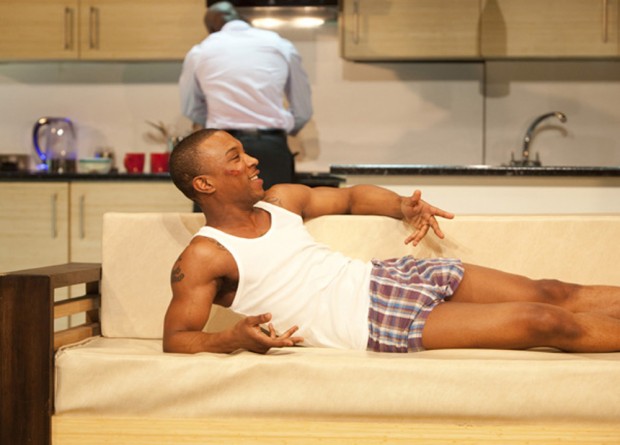 Over the past decade, much of the energy in new writing has come from black Britons. Homegrown talents such as Roy Williams, debbie tucker green and Kwame Kwei-Armah have sent us updates about the state of hybrid, streetsmart culture, and alerted us to the experiences of minorities. In doing so, they have reinvented punchy dialogue, with stage chat that zips along with dizzy humour and linguistic freshness. Hot on their heels comes Bola Agbaje, whose latest play has just opened on the main stage at the Royal Court.

Before the play starts, Agbaje sets out her stall — the curtain has the following lines: “David and Kojo Want Off the Endz/ The Smallest Task Becomes a Big Mission”. The Endz is slang for the local council estate, and David and Kojo are two brothers who, each in his own way, have plans to escape the limited opportunities of living in postcode hell. But while Kojo takes the straight road of a steady job, David wanders into the dangerous underworld of crime. Yes, changing his mind going to be a big mission alright.

The play begins with David (played by star rapper Ashley Walters) arriving at the council flat shared by Kojo and Sharon, who works as a nurse. They hope to move to their own place soon, and Sharon is proud to be pregnant. By contrast, David is just out of prison and eager to hook up with Kojo as well as Sharon, who is an old flame. The rest of the story shows what happens when this triangle clash over how to behave in order to make your dreams of escape from poverty come true.

Although David has limited options, as shown by two hilarious scenes in which he flies into a fury with a black receptionist at Kojo’s place of work and then spars with a black adviser at a jobcentre, Kojo doesn’t have all the answers. The straight world of hard graft and mortgage down-payments is sustained by credit cards and store cards, and threatened by job insecurity. Likewise, David’s idea of buccaneering crime soon runs headlong into the reality of the teen gangs that now rule the Endz.

The impetus of the story is the psychological triangle of two men and a woman. With enormous economy and acute perception, Agbaje shows how each couple — Kojo and Sharon, Kojo and David, and David and Sharon — can outwit the third member of the triangle by imposing rules, or by keeping secrets. Written with a mix of passionate feeling and uninhibited humour, the text is occasionally declamatory, a bit preachy, but never sentimental, or verbose.

Walters lends David an intense, bad boy charm, his hoarse voice and beautiful body dominating the stage as he prowls seductively or loses his temper, flaring dangerously. His final, clamorous assertion of need shakes the building. By contrast, Daniel Francis’s Kojo begins the play with rock-solid certainty, and ends up as passionately tested as the other man. In between these two strong figures, Lorraine Burroughs’s attractive Sharon makes the most of her stinging lines, and when she strokes her belly, you know where her priorities lie.

Nicely designed by Ultz, who bathes the stage with sickly fluorescent lighting evocative of urban graffiti during each scene change, Off the Endz is directed with panache by Jeremy Herrin. Although it is only 75 minutes long, and thus strikes you as more of a rapid sketch than a deeply worked piece, this is a vivid report from the frontline. In one scene, the presence of an onstage ironing board (a nod to John Osborne’s Look Back in Anger) is a reminder that, at this venue, domestic dramas are also state-of-the-nation plays.

Just as Agbaje’s debut, Gone Too Far!, examined the conflict between Africans and West Indians, so her anatomy of black aspiration is frank, outspoken and also both moving and entertaining. Much of the conflict could apply to any youthful couple, of any heritage, so you never feel that you are eavesdropping on a family whose problems you don’t understand. With its zinging lines and rapidly unfolding arguments, this is a fine, if slim, piece of new writing.