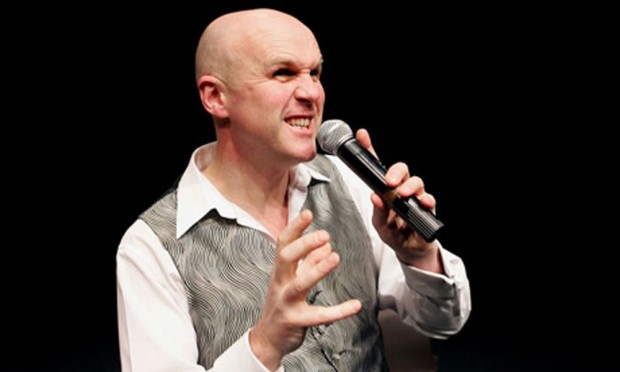 How do you review a show that changes completely every night? This is just one of the conundrums presented by Tim Crouch’s fascinating and challenging new piece, An Oak Tree, in which the author stars as well as directing. Following an international tour, this play has finally made it to London, allowing the metropolitan crowd to sample its quirky delights. And, indeed, they really are quirky.

The central story is simple. A stage hypnotist kills a young girl while driving. Since this car accident, he is unable to concentrate on his work; he’s just going through the motions. And this is losing him audiences. For the father of the dead child, time has also stopped. He feels like he’s in a play, but the trouble is that he just doesn’t know what to say or do. You could say that he’s forgotten his lines. Then, for the first time since the accident, both men meet. The father comes on stage during one of the hypnotist’s shows.

It’s a compelling situation made even more dangerous by the fact that Crouch, who plays the hypnotist, chooses a different actor every night to play the father. Sometimes he chooses a man, sometimes a woman. In every case, the actor hasn’t seen a word of the script, nor have they had a chance to rehearse. Like the father in this simple tale of devastating loss, they really don’t know what they are doing. And, during the show’s best moments, it shows.

The play’s title, An Oak Tree, comes from Michael Craig-Martin’s art work of the same name. You remember Craig-Martin: he’s the godfather of Brit Art. At St Martin’s College of Art, in 1973, he gave contemporary conceptual art a shot in the arm when he displayed a glass of water, and called it an oak tree. But while Craig-Martin’s work seems more and more like pretentious posturing, Crouch’s version is an engrossing study of the nature of performance.

For example, the difference between Crouch’s confident mastery of the theatre space and the uneasy trepidation of his guest speaks volumes about the risks of appearing in a live event. As Crouch prompts his guest, who on the evening I saw the show was Sophie Okonedo (Hotel Rwanda), either by whispering or by talking into a mike that feeds into the earplugs the actor wears, you get a real sense of the fragility of human interaction — a feeling which fits the story like a glove. For when the hypnotist sends the father into a trance on stage, the guest actor is as much at the mercy of Crouch’s suggestions as any victim of hypnosis.

A genuine element of sadism permeates the story, and Crouch excels as the creepy performer, poncing around the stage with the cut-price flamboyance of a failed showman. It’s a really strong, well-prepared, performance. By contrast, Okonedo conducted herself with the quiet dignity and subtle inventiveness of an actor who uses their will power alone (no time for any other preparation) to think themselves into their character. At one point, she expressed the father’s grief with a simple gesture of despair that seemed to draw on our ideas of Greek tragedy; at another, her look of sadness was enough to make you cry. She clearly didn’t know the script, but she never seemed to be completely lost either.

Like Craig-Martin, Crouch — plus his collaborating directors Karl James and a smith — shows how art can transform the world, and at the same time comments on the artificiality of stage conventions. In an age when the experiments of Bertolt Brecht, who used similar distancing devices, feel a bit old hat, this show is an anatomy of the art of performance, as contemporary as it is modernistic, as thrilling as it is troubling.