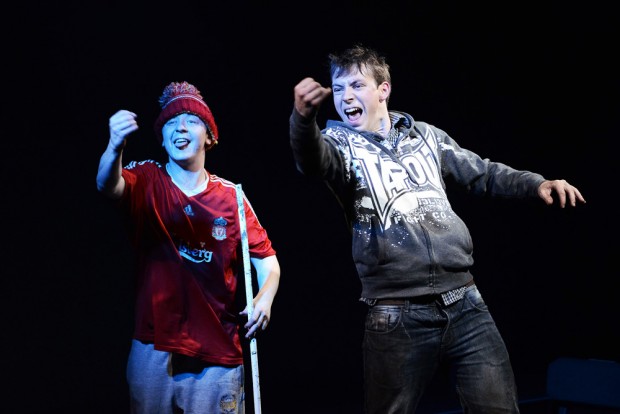 The popular image of the state-of-the-nation play is that of a large-scale, big-cast drama that has an epic time span and lots of highly articulate speeches that analyse the way we are. But sometimes a small-cast play with a much more modest range can be equally successful in saying something worth hearing not only about a handful of characters, but also about contemporary Britain. Such a play is Vickie Donoghue’s powerful debut, which was first seen at the HighTide Festival in May.

Set on a tidal Thames wasteland, a secluded stretch wryly called “The Beach”, the story ebbs and flows around Wayne and Charlie, two 16-year-old mates who are on the run from both the police and from the brothers of Charlie’s girlfriend, Kirsty. They have committed a shocking act of violence. Soon, they are joined by their mate Jake, an ambitious dreamer who might really have a future, if only… Yes, that “if only” brings out the parent, or the teacher, in us. You pray that these boys will survive, even when you know they won’t.

Donoghue’s main strength is her ability to create believable and complex characters out of lads who, when they have their hoods up, we’d probably cross the street to avoid. Wayne and Charlie are boys who been cold-shouldered by their families, and neglected by society. They’ve fallen through the cracks. Yet they are completely different: Wayne is not very bright — he’s a Liverpool supporter who can only name one player in the team. Charlie is more dominating and aggressive, a born leader. But where Charlie is brave and loud, Jack is scared and worried. He has a much deeper moral sense than the other two, but — like them — he’s capable of violence if pushed far enough. In fact, as in Edward Bond’s massively influential 1965 play Saved, here violence is not only a fact of life, but also a metaphor for all the ills of this unequal society. These young lads have no future; they are surplus DNA. Violence is their way of reminding us they exist.

Donoghue shows us a recognisable picture of the urban poor. Like the “destined communities” described by sociologists, these boys nurse vague hopes of escape, while also having a deep gut feeling that they will never be able to leave, that they will never amount to anything. They are not only poor in material terms, but also in their aspirations. (Even the more imaginative Jake is doomed.) But if it’s hard to fault the accuracy of Donoghue’s portrait, isn’t there also something a bit dated about seeing the hopeless poor as representatives of the state of the nation?

Still, Mudlarks is written in a fiery script: it is brutal, corrosive, and full of depressing truths. When one character says, “No one gives a fuck about us,” it’s impossible to disagree. The problem is that, having confined the three to an isolated bolt-hole, there is nowhere for either the characters, or the playwright, to go. Even Jake’s dreams of escape can only be realised in a fantasy sequence. Similarly, Wayne’s poetic appreciation of the dump they live in is one of the few moments that doesn’t quite ring true.

That said, there’s no escaping the controlled savagery of Will Wrightson’s strong production. Amy Jane Cook’s design gives off a genuine whiff of fetid mud, and the cast — Mike Noble (Wayne), James Marchant (Charlie) and Scott Hazell (Jake) — are uniformly good, even if they inevitably seem older than the ages of their characters. Thanks to them there are moments when you can feel the hairs rise on the back of your neck as their terrible predicament becomes clear. At 80 minutes, it’s a short play, but a cruel, brutal and depressing one. Despite my doubts about its plotting, Donoghue’s voice is a strong and compelling one.