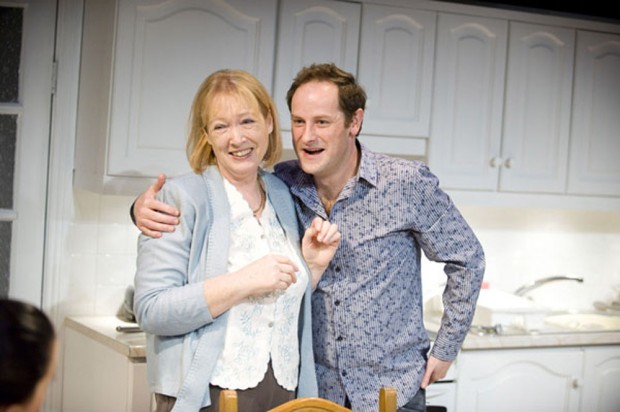 At the moment, with only a couple of exceptions, most of the energy in British new writing seems to be coming from American and Irish playwrights. This is such a regular phenomenon, one that comes around every few years, that it seems idle to speculate on the reasons for it; surely, it’s enough to welcome another new talent from Ireland? As well as being the artistic director of Tall Tales theatre company, Deirdre Kinahan is a prolific playwright. Her UK debut, Moment, opened tonight at the Bush Theatre in west London, and is an engrossing study of a dysfunctional family.

Of all the ordeals of modern life, bringing home your new wife to meet your mum must be one of the most nerve-jangling occasions imaginable. Especially if you didn’t invite her, or your two sisters, to your wedding. But this is no ordinary family. We are chez Teresa Lynch, the Dublin mother of Nial, Niamh and Ciara. Despite the dazzling cleanliness of her kitchen (designed by Maree Kearns), where the play unfolds, it soon becomes evident that mum is not well: medication is mentioned; she looks distracted; she takes to her bed. But knowing that her son, the 30-year-old Nial, is coming home for tea means that she does her best to keep up appearances.

Teresa is helped by her two daughters, the good-natured Ciara and the more acerbic Niamh. Ciara is married to Dave and Niamh is having an affair with Fin, a colleague from work. But the real stranger in this family is Ruth, Nial’s guest. As each of these characters arrives, the atmosphere starts to buzz: beers are opened, wine is poured and quiche is served. The usual embarrassments quickly surface: awkward introductions, names misheard and the accidental swearword uttered. But the unspoken family secret, as the programme and publicity warn you, is much, much worse.

About 14 years ago, when he was just a teenager, Nial murdered Hilary, Niamh’s best friend — the girls were just 12 years old. The moment when this taboo subject is openly mentioned is one of those gob-stopping, heart-grabbing instances of acute drama. Pretty soon, the truth-telling starts and the pretence which has governed this family for a decade and a half begins to unravel. For not only is Nial’s transgression a grim secret that no one dares to mention, but the reactions of his mother seem, by the end of a thrilling evening, almost as monstrous as the crime itself.

In Kinahan’s precisely written, well-observed play, which was first put on in Ireland two years ago, maternal love appears almost like a perversion, as Teresa survives by denying the truth about her son. Her two daughters, in various ways, bear the brunt of this guilt, and their lives — it gradually emerges — have become even more of a prison than the one that Nial was once locked up in. A gut-wrenching sense of loss pervades this clan, so much so that Teresa’s delighted exclamation, “You’re family now!” sounds almost like a death sentence.

As the play spins out its themes of traumatised memory, desperate repression and the complicity of silence, Kinahan’s faultless plotting keeps you engrossed, and her often humorous account of sibling rivalry and everyday bitching is guaranteed to entertain. David Horan’s production, for Tall Tales, is perfectly cast: Deirdre Donnelly’s Teresa appears to be a befuddled pill-popper, but gradually turns into a study of steely denial. As her crushed daughters, Maeve Fitzgerald (Niamh) and Kate Nic Chonaonaigh (Ciara) mix incredulity with anger, and grow visibly during the evening, while Ronan Leahy’s Nial is convincingly edgy. The whole ensemble — which includes Will Joseph Irvine as Fin and Rebecca O’Mara as the English Ruth — delivers excellent performances in a play that shows how one “moment of madness” can create a lifetime of damage. Moment is both a merciless excavation of a trauma and an enthralling, often disturbing account of how families can suffocate as well as nurture. It’s a terrific piece of new writing.