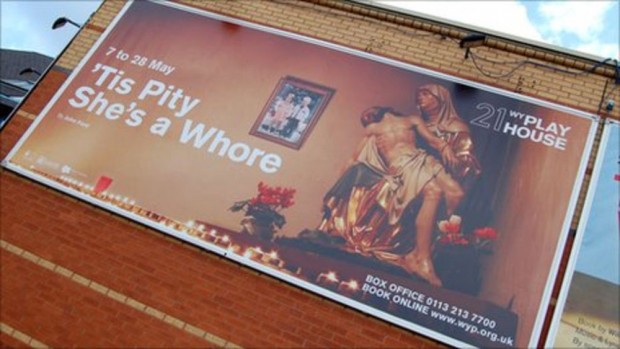 Those ghastly Roman Catholic hierarchs are at it again. This time, the West Yorkshire Playhouse finds that its poster for an upcoming production of John Ford’s ’Tis Pity She’s a Whore has offended the local Catholic community — it shows an image of an altar with a Pietà (grieving Virgin Mary holding the dead body of her crucified son Jesus in her arms). Local religious nuts are arguing that the poster implies that Mary is a prostitute. Now, either this is extreme bad faith or gross stupidity. In the former case, I suspect that local Catholics, led by Bishop Arthur Roche — perhaps jealous of all the attention that Muslims get when they make religious protests — are opportunistically jumping on the bandwagon. Or, these rampant idiots simply have a stupidly literal attitude to images — in which case, they are in the wrong sect: they should become Protestant Evangelicals this very instant. Or get some lessons from the local Jesuits, who might at least have a more sophisticated attitude to how representation works. Either way, isn’t it just a little odd that they have nothing better to do than to make trouble for the West Yorkshire Playhouse? Crass stupidity; but dangerous censoriousness.