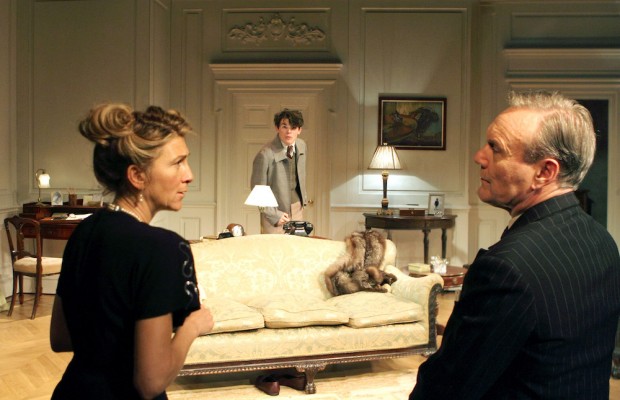 The rehabilitation of playwright Terence Rattigan has surpassed even the stage when not only are his best plays regularly revived, but also his less good work now reaches a large audience. So last year his masterpiece The Deep Blue Sea was at the National Theatre, while the enterprising Kenneth Branagh revived Harlequinade for the West End in November 2015. The days when critic Ken Tynan and the Angry Young Men scorned Rattigan and his ilk seem to have been consigned to a distant past. Now the energetic Trevor Nunn has delved deeper into the playwright’s back catalogue and found an intriguing play from 1944. And he’s cast Eve Best in its central role.

Love in Idleness has had a long and troublesome history. Originally written by Rattigan for actor Gertrude Lawrence, and titled Less Than Kind, it was rejected by her and then offered to the theatrical star couple, Alfred Lunt and Lynn Fontanne. The Lunts made it a big West End and Broadway hit, but not before they had persuaded the playwright to rewrite substantial portions of it. The result was less politics, more crowd-pleasing entertainment. And a stronger storyline. Even the original title, a reference to the Hamlet theme than runs through the play, was changed to the more lighthearted Love in Idleness. Looking for a Rattigan play to revive, Nunn came across Dan Rebellato’s Introduction to the published edition of the two pieces, and took up his suggestion that “perhaps an enterprising director might like to attempt a synthesis of the two, retaining the political complexity of the former and the tautness and theatrical assuredness of the latter”.

The plot of the play doffs its cap at the Oedipal interpretation of Hamlet: a mother is torn between her new lover and her son. Olivia Brown (Best), a widow who is enjoying London highlife despite the restrictions of wartime rationing, is living with Sir John Fletcher, a rich businessman who is in Winston Churchill’s war cabinet. The problem is that he is unable to divorce his estranged wife, Diana, because the scandal might rock the government. When Olivia’s son, the leftwing 17-year-old Michael, returns from Canada, where he was evacuated to at the start of the war, he hates his new step-father because of his wealth, his politics and his mother’s affection for the man. So he decides to involve Diana in a juvenile plan to disrupt Olivia’s relationship with John.

The play is a rather awkward mixture of a comedy of manners, a psychological thriller and a domestic drama. Even after the attentions of Nunn, these elements don’t really blend and the result is an awkwardness of tone that even the most spirited acting can’t quite hide. What is most in evidence is the play’s politics: in the generational conflict between John and Michael there’s a lot of discussion about capitalism, with memories of the effects of the Great Depression of the 1930s jostling with hopes for the postwar socialist settlement. Nunn includes video projections of 1940s newsreel footage at the start of the show, and between scene changes, that underline both wartime restrictions and postwar aspirations (including the classic film of William Beveridge explaining the contents of his report).

Psychologically, Rattigan’s play is a compelling portrait of a complex triangle, with Best’s vivacious and socially aspirational Olivia nicely contrasting with Anthony Head’s stolid but reasonable John, while Edward Bluemel (who played a similar role in ITV’s The Halcyon) gives Michael both a childish vulnerability and a youthful passion. As the relationship between Michael and John develops, their political conflict softens and they bond as men, both equally exasperated by the women in their lives. This casual sexism, so common in its time, tends to subvert much of the play’s politics, and leaves a rather unpleasant taste in the mouth. Nevertheless, there is much wit and some pain in this entertaining evening, which is designed by Stephen Brimson Lewis and also features Helen George as Diana. Love in Idleness is not Rattigan’s best play, but it is a typically perceptive and amusing study of duty, sacrifice and repressed feeling.