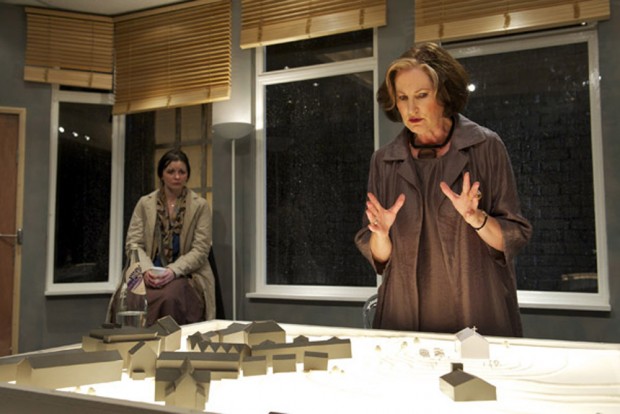 One of the many absent friends in contemporary British drama is the play that tackles questions of religious belief. At a time when more and more people take their faith more and more seriously, this lacuna at the heart — or should that be soul? — of new work is surely regrettable. But perhaps the tide is now turning: in May, Drew Pautz’s Love the Sinner at the National Theatre examined belief and sexuality; now Australian playwright Anthony Weigh, whose new play opened tonight, wrestles with death and memory.

The set-up is simple. Following a horrific massacre at a quiet infant school, somewhere in the countryside, the Architect is commissioned to design a monument to the tragedy. But on the eve of presenting a model of the project, she is visited by the bereaved and blind Mother, whose daughter was one of the victims. In the minutes that count down to the moment when the Architect must leave to attend the presentation, the clash between these two women grows in intensity.

The Architect, who is at the height of her powers, is classy, professional and privileged. But her artistic modernism runs straight into the altar rail of the Mother’s personal experience, and her atavistic populism. So while the Architect fields the jargon of contemporary art projects, wanting to create a “context” for visitors to the site, the Mother wants a solid and traditional memorial to the dead, an object which has concrete meaning — something to justify the ways of God to men.

Lots of other questions tumble out of the Architect’s model drawer: who is best authorised to represent a grieving community? One religious believer, or those who have contributed to the democratic consultation process? After a bit of this kind of skirmishing, the Mother’s attack broadens out to embrace the Architect’s womanhood, and then even more intractable questions about the role of women (career; motherhood) are raised and grappled over. As tempers heat up, the project model begins to look increasingly vulnerable.

At first, Weigh’s text seems to be deliberately irritating, with its repetitions and its vagueness about circumstantial detail. He deftly captures the empty jargon of the modernistic Architect and the down-to-earth common sense of the Mother. Much less convincing is his account of her religious faith, and by the end the image of the Mother we are left with is that of a hysterical, crazed fanatic. All reason seems to be against her. This is hardly fair, and, although neither woman is very appealing, the drama fizzles out well before the end of what feels like a very short and rather slight piece.

On Lucy Osborne’s arty set, Josie Rourke’s clear and uncluttered production casts Deborah Findlay as the arrogant Architect and Sarah Smart as the blind Mother. The one is articulate, confident but ends up almost broken by the confrontation; the other is by turns querulous, insistent, manipulative and, yes, as crazy as a medieval relic. As the Architect’s admiring Intern, Phoebe Waller-Bridge provides a bit of light relief, although her role is underwritten. Despite some unsettling passages, Like a Fishbone fails to stick in the throat.