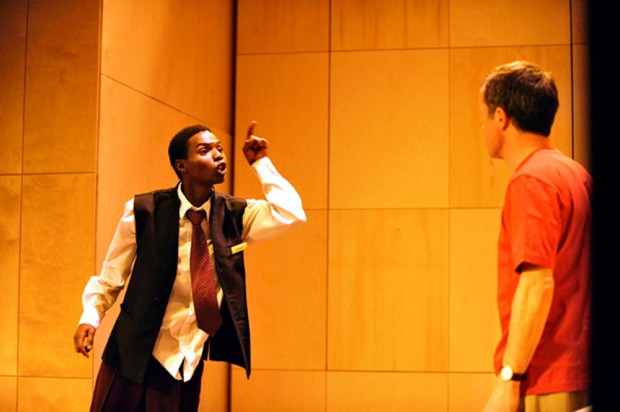 Religion, and a sense of the revival of belief, is such an important part of everyday life in the wider population that it is one of the stranger facts about contemporary theatre that so few plays tackle this subject. In fact, the last new British play to do this at the National Theatre was David Hare’s Racing Demon in 1990. Now, 20 years later, the same Cottesloe theatre space bears witness to a new play, which opened tonight, about the same subject.

Canadian-born playwright Drew Pautz’s Love the Sinner begins at an international meeting of church leaders in a hotel somewhere in Africa. As these Protestant bishops — led by the conciliatory Stephen — debate the role of gays in the ministry, divisions between believers in the West and their co-religionists in Africa emerge. Tolerance clashes with fundamentalism. At one frustrating point, an ugly streak of racism is also in evidence: are black bishops culturally backward? Meanwhile, in one corner, Michael, a lay volunteer, sits quietly typing the minutes of the meeting.

In the next scene, this silent typist comes alive. He is in his hotel room with Joseph, a local black man who works as a porter. The two men have just had sex. Gradually, the awkwardness between them evolves into an argument: Michael, who has got to check out and join the other conference folk, wants Joseph to leave. But Joseph has other ideas. He wants to come to Britain. Being gay in Africa, he argues, is a risky business. It’s illegal, and punishments are draconian. Besides, doesn’t he deserve a slice of the Western cake?

When Michael finally gets rid of Joseph, and returns to Britain, a lingering sense of guilt makes his relationship with his wife Shelly just that bit more edgy than usual. To save himself, he has started reading his Bible more intensely. Naturally, she is suspicious: she knows he’s lying, but isn’t sure why. Besides, her main preoccupation is with conceiving a child — that biological clock is ticking loudly. But can this couple reconcile IVF treatment with religious belief, and can Michael hold things together both at home and at work?

Drew Pautz excels in dramatizing conflict, articulating the arguments, showing the psychological manoeuvres and desperate evasions, always contrasting true feeling with bad faith. In his hands, an innocuous phrase such as “I’m surprised to hear you say that” can feel as dangerous as a declaration of war. The mix of understatement, subtext and sheer venom is cumulatively exhilarating, and the contrast between the wishy-washy liberalism of the West and the violent convictions of the Africans turns this story of marital unease into something much bigger — an account of global inequality, material as well as sexual. The knotty nexus between religious belief, personal emotion and the wider politics is confidently drawn.

In Matthew Dunster’s perfectly pitched production, boldly designed by Anna Fleischle, Jonathan Cullen plays Michael with the kind of sincerity that gives you an excruciating sense of a human being unconsciously flaying himself alive. He manages to convince you that his lack of self-knowledge is tragic, and this makes for a compelling human drama. On his path to his personal Calvary, he collides with Charlotte Randle as Shelly, his initially incredulous and then increasingly angry wife. There is also excellent support from Fiston Barek as Joseph, part vulnerable, part threatening, and Ian Redford as the emollient Bishop Stephen, plus Scott Handy as his controlling spin-doctor.

This is a play of ideas and emotions that both articulates current anxieties about global inequalities, and shows how religious belief can be fuelled by psychological distress. By avoiding easy answers to the issue of gays in the church, and fielding a powerful image, in the character of Joseph, of a vengeful African haunting a repressed and unfaithful Englishman, the drama is both complex and satisfying. So yes, as you can see, I do love the sinner — not the character, but the play.