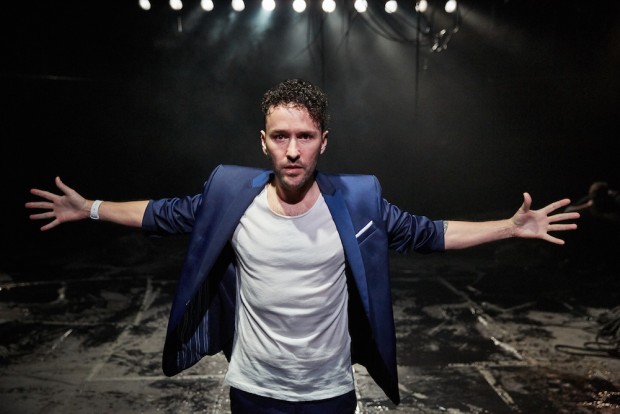 The monologue is a terrific theatre form. Using this narrative device, you can cover huge amounts of storytelling territory, fill in lots of background detail — and get right inside a character’s head. But the best monologues are those that interlock with other solo voices, giving different points of view on the same situation. That’s what Welsh playwright Gary Owen (Violence and Son, Iphigenia in Splott) does with his latest, Killology, which opened in Cardiff in March and now arrives at the Royal Court in London. He also gives this theatre form a provocative twist. Or two.

Owen fields three characters: Paul, smarmy son of an industrialist, has invented a game, Killology, in which players torture their victims. Sounds gross enough, but Paul has given it an extra dimension: you score more points depending on how creative you are in your torturing. And you lose points if you turn away in horror from watching the depiction of your violence. Paul was inspired by a sense of competing with his father, and this game has become wildly successful, but what about his own desire for kids?

Then there’s Alan, whose son has suffered an appalling act of violence, inspired by Paul’s game. Now Alan wants to inflict retribution on Paul, whom he holds responsible for his son’s tragedy. He plans his revenge meticulously, but can he go through with it? And can his life survive this injection of hatred? And, finally, there’s young Davey, raised by a single mother and living in poverty. His world is peopled by bullies and absent fathers, and his main source of love is Maisie, a mongrel dog. Without a father, can this young teen make something positive of life — or is it already too late?

Owen’s main theme is father and son relationships, and the destructive masculinity that comes from either too much money or too little money. The play examines three different cases of personal responsibility, and its emotional core is the powerful idea that you can turn your life around, that you mustn’t give up. While this is stirring, what Owen’s writing does is place its hand right inside your chest and grip your heart, ventricle by ventricle. At moments, this almost chokes you up; at other times, the verbal torrent carries you into dark places: the bullying scenes are unbearable.

On one hand, Killology is a tract about parental responsibility, and it balances the brief pleasures of fatherhood with the nagging anxieties of paternity. On the other, it is a bravura performance of storytelling, with episodes that are presented in such a way that they seem to be part of one story, or maybe only fantasies. Or both. Owen analyses our revulsion from violence, and shows how video games, and indeed all creative art, might be habituating us to accept the unspeakable. Provocatively, he even suggests that bad fathering might makes us more prone to behaving violently.

This is a dense and complex piece of writing. Thinking about it, Owen doesn’t quite succeed in making the connection between art (the video game) and bad parenting, and he struggles to relate the Killology game to underclass violence. What he does show is how each generation reproduces the bad stuff of previous generations, and how a decision to do the wrong thing might, under exceptional circumstances, result in a person doing the right thing (eventually). By offering what could almost be two scenarios of the Alan and Davey relationship he also shows how our fate lies squarely in our own hands, which is where it should be (whatever our experience of parenting, or being parented).

Brilliantly directed by Rachel O’Riordan of Cardiff’s Sherman Theatre, with a black, water-soaked, dark set by Gary McCann, loaded with the detritus of curled grey industrial ropes and dangling digital cables, this is a thoroughly overwhelming production, which pulls at your heart and at your tear ducts. And dazzles you with explosive ideas and mind pictures. All the performances are superb: Richard Mylan’s Paul is slick, charming and off-putting, Seán Gleeson’s Alan is stolid, serious and deeply angry, while Sion Daniel Young’s Davey is energetic, callow and wonderfully open. A beautiful balance of love and hate, Killology is both disturbing and life-affirming.