Home » Reviews » If We Got Some More Cocaine…, Old Red Lion Theatre

If We Got Some More Cocaine…, Old Red Lion Theatre 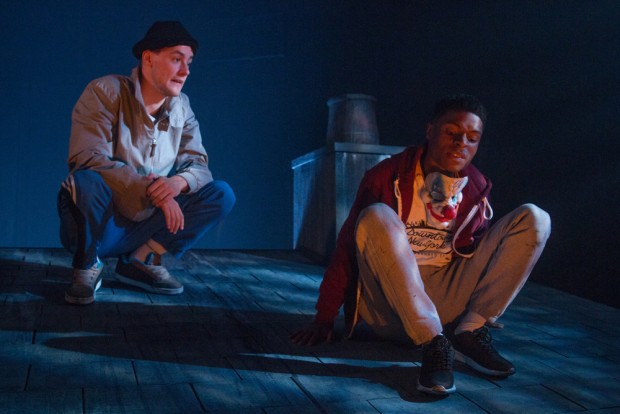 It’s called painting yourself into a corner. One tactic used by contemporary playwrights is to put their characters into a situation that is so desperately tight that the audience immediately worry about what will happen. And then the challenge for the writer is to pen their way out of this squeeze. In John O’Donovan’s debut play, whose full title is the glorious If We Got Some More Cocaine I Could Show You How I Love You, the predicament of its two characters is certainly scary — they’re on the run from the police, and they’re stuck on a rooftop.

In a small town somewhere in the West of Ireland two petty criminals, the older Mikey and the younger Casey, have spent the evening of Halloween robbing a petrol station and then breaking into Casey’s home and pilfering some cash that his mother has stashed away. But somebody has seen them, and called the cops. Finding their escape route of choice (over the back-garden wall) impossible to use, they’ve made a spur-of-the-moment decision to climb up a drainpipe and hide out on the roof of Casey’s house. Perched in this precarious position, with their tell-tale balaclava and clown masks, they decide to sit it out while police cars arrive and Guards officers knock on the door below.

Being trapped on the roof means that the two young men have plenty of time to discuss their sorry state and reveal who they are and what they feel. So Mikey, a twentysomething Irishman, displays all the bravado of a self-taught chancer, a fighter and a thief who is already well known to the authorities. If the police catch him now, he’ll have to serve time. So he has a desperate edge, which is intensified by his feelings for Casey, a young-looking 18-year-old black migrant from south London. Although the more naive Casey is in love with Mikey, his feelings are mixed up with his hatred for his step-dad Bobby and his fear of the Kennans, the hostile traveller family who live next door.

The central image of two youths swaying dangerously on a roof, their noses ablaze with coke, their lungs full of smoke and their bellies on fire with spirits, is a powerful visual metaphor of the deeper trap of the two men’s lives. With immense control and skill, O’Donovan releases information about their backgrounds gradually throughout the 75-minute drama, building up a picture not only of two individuals, but also of a whole society in which the majority of youth who leave and go to Dublin or college seem like a different species to the two underprivileged outsiders on stage. Their alienation from mainstream society is inflected by larger issues of race and sexuality, which are treated both briefly and with great humour.

Powerful, laugh-out-loud funny and emotionally true, If We Got Some More Cocaine… explores the deepest feeling of all, perhaps even the deepest trap, namely love. In dialogues that are not only entertainingly humorous, but also convincingly energetic and alive, love — not for the first time — is the strongest four-letter word. Although the premiss of the play reminds me of Beau Willimon’s Lower Ninth, O’Donovan resists the temptation to imitate Beckett and his writing has a refreshing vigour in its portrait of emotional damage and youthful anger.

And he’s very well served by Thomas Martin’s tense and exciting production, which roars up nicely to its excruciating climax, featuring a realistic set by Georgia de Grey and two engaging performances from Alan Mahon as the loud-mouthed but big-hearted Mikey and Ammar Duffus as the shy and more inexperienced Casey. The piece’s edgy hilarity comes across strongly, and the evening proves that there can be a pulse of genuine romance in even the darkest situations. Great stuff!