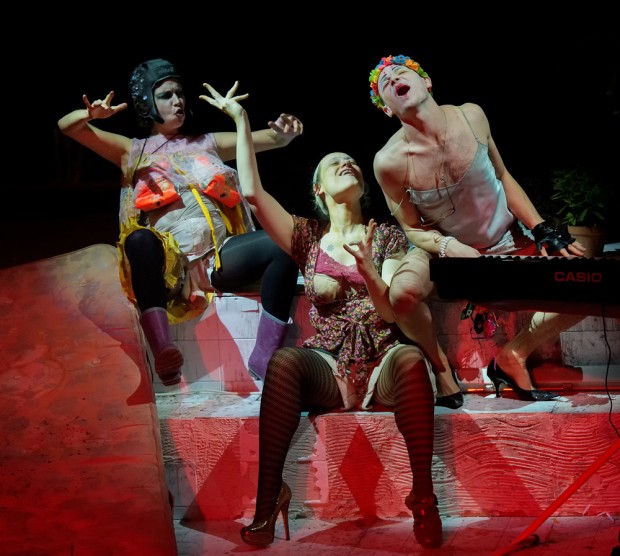 Sometimes the deadliest violence is silent. The publicity for Caroline Horton’s new absurdist satire, Islands, points out that Oxfam estimates that some $18.5 trillion is siphoned out of the world economy into tax havens by wealthy individuals. That’s some nest egg! Likewise, Christian Aid has calculated that 1,000 children die every day as a result of tax evasion. As we know, the super-rich one per cent own most of global wealth. Dreadful. Clearly unjust. But what can theatre do about it?

Well, until recently, the most common critical tactic was verbatim theatre — as in David Hare’s The Power of Yes — but this has recently been superceded by a more absurdist and fantastical approach, as in Clare Duffy’s Money: The Game Show. This is also Horton’s way: a piece that she devised with her company of actors, Islands is partly a Brechtian polemic, partly an Ubu-esque nightmare, partly cabaret — with some madly jazzy songs — partly game show and partly a party. As usual, the choice of devising over having an individual playwright produces a text that feels quite self-indulgent, meanders in its storytelling, although it must be admitted that it does have a distinctive voice.

The play denounces the immorality of tax havens, with their luxury lifestyles for a few high-net-worth individuals, and argues that “violent aggression towards the rest of the world is hidden beneath offshore’s facade of respectable business”. The massive human costs of the activities of the super-rich come at us, dripping blood and gore. Behind the clowning of the show there is the distant sound of weeping; far away from West London people are really suffering.

The tax haven is a cloud that floats above the rest of the world, and Mary is the key player in a place where bankers are gods, and have names such as Agent and Swill, and Mr and Mrs Ordinary are called Adam and Eve. The catechism is neo-con economics and, as in any Forced Entertainment show, people whisper into microphones about money-making, society and politics. Well, sort of. A highpoint is Mary’s description of a bullfight, a bloody symbol of the bull market of stock exchanges everywhere. And then there’s a cruel rape scene too.

Horton’s main aesthetic is based on bouffon performance (a Jacques Lecoq-style of mockery that uses slapstick and wild exaggeration to make its political points). In keeping with this style, the actors wear buffoonish costumes, fat and fleshy, or cross-dress in outrageous ambiguity. The set, designed by Oliver Townsend, is filthy, more like a squat than a tax haven, with shit stains, muddy patches and old mattresses. Cherries, which symbolise money, are scattered around and squashed underfoot.

The freewheeling text, which leaves plenty of space for clowning, chatting with the audience and songs, meanders through the story, where the real world is rechristened Shitworld. The language is filthy, and — as in Daniel Andersen’s recent Saxon Court — I found the constant scatalogical references soon becoming tedious in the extreme. Nor was I convinced that the Biblical references supported the politics of the show: if Adam and Eve are punished for their curiosity and desire for knowledge, and money, how does that help us understand today’s hedge funders? The play’s supporters will doubtless delight in its silliness and squalour — I felt that the clowning unfunny and the shit jokes deeply tiresome.

Although the company conveys some of the vindictive aggression of unfettered capitalism, languidly mocking political protest and radical acts, I thought that the messy structure of the piece and the constant buffoonery both tiring and un-illuminating. Isn’t there something patronisingly didactic about dispensing a few nuggets of information to the blind masses? I felt that the imagination of the show got in the way of its anger, and blunted it. As directed by Omer Elerian, the five-strong cast — Horton herself as Mary, John Biddle (Agent), Seiriol Davies (Swill), Simon Startin (Adam) and Hannah Ringham (Eve) — are excellent. But I left the show feeling that this was a 30-minute sketch that has been stretched out to 110 minutes. To use its own metaphor, it is pretty shit.