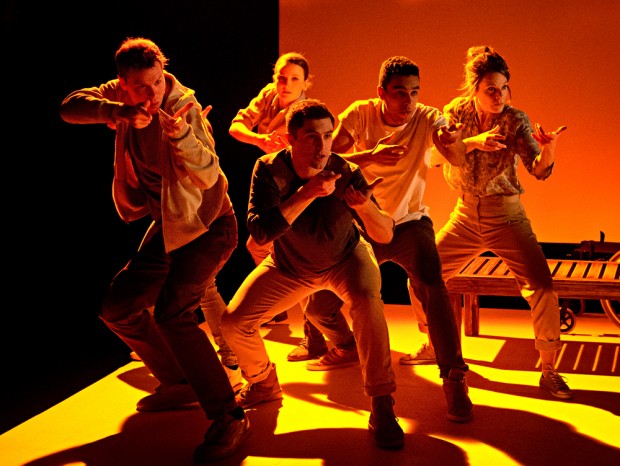 The war in Afghanistan has not exactly been neglected by contemporary British theatre, and the plight of returned soldiers is a standard trope of new writing. These distant wars function in our culture like worse-case scenarios, an excoriating version of hell on earth, where survivors come back to haunt the comfortable, and to tell us things about being human that we never really wanted to know. Some playwrights have found poetry among the ashes of hatreds and horrors — and writer Owen Sheers is one of their number.

Dateline, Bristol, 2008: three young mates — Arthur, Welsh Taff and the mixed-race Hads — are bored with their deadend jobs, their daily everyday, and their weekend binges. On a whim, Arthur joins the Army, then persuades the other two to do the same. All three are deployed to Afghanistan, to Camp Bastion and Sangin, and to the hell that is war. They see action — soldiers blown up by mines, soldiers hit by snipers, soldiers shot up by friendly fire (called “Blue on blue” in the jargon).

Then they return to their women. Hads, the youngest, comes home to his mum Sarah; Taff comes home to his wife Lisa and baby son Tom; and Arthur comes home to his girlfriend Gwen. But they are no longer the boys they were. Each of them has changed inside; they are strangers. Now they are men: the army has made them while war has unmade them. Now they have mental and physical wounds, whether obvious such as the loss of limbs, or buried deep beneath scar tissue. So the women have to cope with the Afghanistan war’s home front.

As research for Pink Mist (the name given to bodies exploding in action), Sheers interviewed soldiers and their families, and the result is a highly sympathetic and largely authentic account of modern soldiering, and of its emotions. He has written the piece as a series of monologues in which the men and women narrate their stories and describe their experiences. Choosing the form of blank verse elevates the tone of the events, giving them a sense of being an epic saga, resonant of ancient tales of valour and long-forgotten conflicts. In this poetry there are portents and prophecies, repeated refrains and heightened language. Sensations are magnified and feelings elevated.

This reminds us that war is as old as humanity and that for men it is a source of glory. Sheers also explores the question of what attracts young men to war, whether this is a sense of adventure, a lust for meaning or loyalty to their mates. Whatever the reason, the place of war is a mental landscape that takes over the souls of these trumatised men, so that they can never really come back to normality. At the same time, the poetry of the play suggests that there is something sacred about the body, in all its beauty and all its pain.

A Bristol Old Vic production, where the show began last year and will transfer to again when its London run is over, Pink Mist is impressively directed by John Retallack and George Mann in a way that perfectly complements its poetic text. The ensemble cast (pictured above) — excuse the list but they are all excellent: Phil Dunster (Arthur), Peter Edwards (Taff), Alex Stedman (Hads), Rebecca Hamilton (Gwen), Rebecca Killick (Lisa) and Zara Ramm (Sarah) — also play the parts of other soldiers and youngsters during the beautifully choreographed action scenes and episodes of excessive drinking. They dance wildly, they throw shapes, they strike military poses and they do somersaults.

What you remember most is the blaze of red light and military soundscape in Emma Cains’s effective design, the dance sequences, the language practice, the “combat itch” and the repetition of the playground phrase, “Who wants to play war?” It is physical theatre that is expressive, if not always original. But the effect of this eloquence of stage picture, which matches the eloquence of the language, is to make the men’s experience a bit artificial. These soldiers don’t swear; they don’t smell; they’re not ugly. So some of the pity of war is muted by the beauty of the staging, with the piece being a bit too slick for its own good. Somehow this leads to an aestheticization of the horror and a calming of the impact. Nevertheless, there is plenty of harrowing material and the powerful ending is desperately moving — and you leave saddened, but with a deeper understanding of why so many men really do love war.