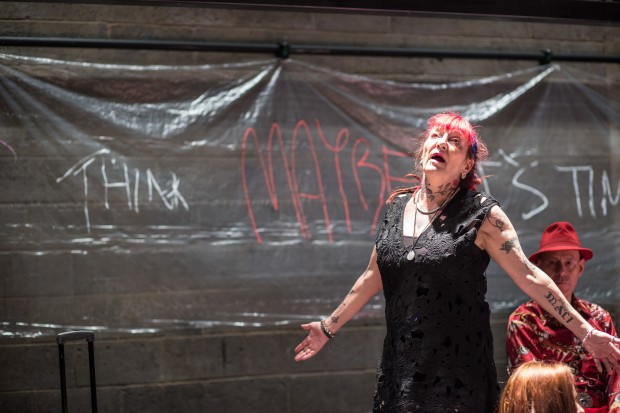 Verbatim theatre always raises theatrical and ethical issues. The use of the words spoken by real-life, as opposed to fictional, people always argues in favour of authenticity (which is not the same as truth). In theatre terms, the results are often rather boring, relying on editing or journalistic skills rather than on the imagination, on creative invention. Verbatim theatre pieces tend to be heavy on literal reality, and light on metaphorical truth. They also raise various questions about ethics: is it right to exploit real-life people for the purposes of entertainment? What about privacy?

Such questions are particularly acute when it comes to sex workers. Why do they choose this kind of work? Why does anyone take the risk of being intimate with a stranger for money? How do you protect the identity of people who are breaking the law? This new show, See Me Now, which was not only devised with the help of genuine prostitutes, but is also acted by them, introduces us to both the enormous variety of sex workers and to their wide range of motives. The play, which was created by director Mimi Poskitt and playwright Molly Taylor, takes us by the hand and gently ushers us into a darkened room, designed by Katrina Lindsay, to show us a slice of life that is mainly invisible to most of us.

Much of the show tells their highly individual stories, and is about their daily lives; sex is a job, with all the routine and boredom that implies. It’s about sitting around, about waiting, about sending emails, about being bored. It’s also dangerous: the evening begins with a list of precautions (make sure that your phone is charged, that you get money upfront, and that your mates know where you are). One of the few political points in a piece of theatre that is mainly about personal experience is the need to change the law. At the moment, you can sell sex, but if you are managing a brothel you are liable to get busted. And a criminal record. Yet brothels are much safer than working alone.

Although most of the show is composed of sex workers telling fragments of their life stories and experiences direct to the audience, there are plenty of joyful moments: a powerful song; dressing up as Messalina, Nell Gwynn and Cynthia Payne; some contortionistic dancing. Amid the strain of selling your body there is a lot of wry humour, a lot of mockery and a fair bit of wisdom. Occasionally, a strong metaphor — uncomfortable boots, singing in the bath or running away as fast as you can — lights up the darkness of the oldest profession.

It certainly makes a nice change that the performers are not professional actors. They talk, but don’t declaim. They stumble over their words; they forget their words (and it doesn’t matter a bit!). Their voices sometimes crack with genuine emotion — it’s not fiction after all. And how can you criticize people for not being good at acting when they are not actors (apart from when they are doing their jobs). Tricky. At the same time, this kind of theatre raises various ethical issues: it occasionally feels like counselling, or social work. The authenticity of the performer disarms criticism, and imposes a dictatorship of real life over artifice. And, morally, it’s uncomfortable: if these people are exploiting their life stories for our entertainment, does that make us wanking voyeurs? Not so much of their sex lives (the show is quite discreet), but of their pain. Isn’t this an example of zoo theatre?

On the other hand, there is much here that is touching, moving. Personal experience like this speaks directly to us, and the performers seem to be emotionally truthful. And some moments are very strong: Peter tells the story of his four-year love affair with a woman, and it tugs at the heart strings; the accounts of addiction to crack cocaine are full of sadness; there’s a moment in the description of S&M which has men crossing their legs and looking agonized; one man has sex with a male prostitute and confesses that the last time he fucked a bloke was in 1943. Some of the sex workers, like Ric, claim to enjoy prostitution (it’s a form of freedom); others do not. Adorable, from Nigeria, was trafficked, and Beth, an actress, now has a criminal record — which makes finding legitimate employment much more difficult.

There’s also something rather relentlessly upbeat about See Me Now. By the end of the 100-minute performance it feels like a cross between revivalist meeting and a therapy session where good feelings triumph over bad. At times, the structure of the play meanders a bit, and it doesn’t go deep enough. Although the performers are anonymous, and we are warned not to photograph them, we begin to want to embrace them, to heal them even. (A strange feeling for theatre.) Still, there are enough examples of bad stuff to ground the piece in reality. Although the sheer awfulness of prostitution is maybe not stressed enough, it is clear that we are watching damaged lives in recovery. More than that, however, it is great to hear some authentic voices testify to real-life experiences. And the T-shirt that says “Orgasm Donor” is a hoot.