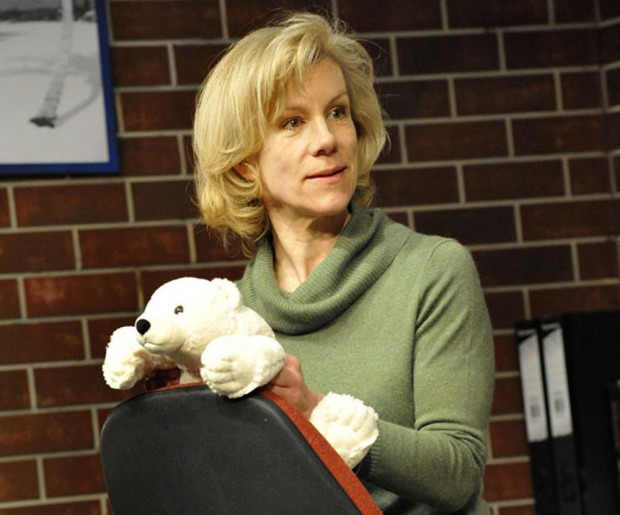 From being virtually ignored by theatres and playwrights, the issue of climate change now threatens to swamp the programmes of our flagship theatres. If this is a good thing, meaning that the heat has been turned up on the debate, can public interest be sustained at this rate? After Greenland opened at the National Theatre last week, now it’s the turn of Richard Bean’s new play, which had its premiere at the Royal Court tonight, in a production starring the superb Juliet Stevenson.

The story revolves around the character played by Stevenson, Dr Diane Cassell, an academic who specialises in sea-level rises, and works at an Earth Sciences university department (nicely cluttered design by Peter McKintosh). Although she is seen by some as a climate change sceptic, a heretic who deserves the death threats she is beginning to receive, she has a more attractive view of her role. For her, scientists are meant to be sceptical: knowledge only advances when people ask questions. People who “believe” in climate change are merely the newly religious.

Such attitudes put Diane on a collision course with Kevin, her head of department, mainly because he wants to make a lucrative commercial deal with a foreign company, and needs to project an image of green orthodoxy. Yes, this is also a tale about market forces blowing through the education system. But Bean neatly wraps his political points in a family story by introducing Phoebe, Diane’s anorexic daughter, and Ben, a lonely student who is drawn to both mother and daughter, especially daughter.

Now Bean is one of the most provocative playwrights currently working in British theatre. But the outrageousness of some of his jokes is here balanced by his humane feeling for his characters, who include the typically eccentric Geoff, a disgruntled security guard with a mania for turning off the lights to save energy, and Miss Tickell, the human resources manager who spouts bureaucratic language with all the precision of an employment contract.

Using his trademark punchy one-liners, some of which are absolutely hilarious, Bean introduces a host of issues and opinions. From the start, this is a play which crackles with jokes about everything from electric cars to vaginal infections. The effect is a riot of laughter larded with vivid insights into scientific methodology, eco-militancy, techno-dependence and the decline of the university system, as well as touching observations on the fragility of friendship and the necessity of letting go of your children.

Unlike in his previous play, The Big Fellah, here Bean treats all of his characters with intense respect, and the belly-laugh humour is balanced by the intellectual stimulation of his transgressive ideas. Of course, some will cry foul about his interpretation of the East Anglian Climategate email scandal, but the sheer pleasure of the play’s energy brushes aside such objections. And after all, isn’t this a piece as much about love as about climate change?

Jeremy Herrin’s production radiates with some exceptionally memorable moments, which include Stevenson’s use of a cuddly polar bear as an ally, an episode that is both hilarious and heartbreaking. At one point, newsreader Jeremy Paxman appears in a projection of a Newsnight interview. You also remember Ben’s demonstration of a scientific theorem by using the metaphor of “thermal chickens”. Similarly, Kevin’s listing of the ups and downs of various academic disciplines since the 1960s is brilliantly written, and both the characterisation of climate science as the “perfect religion for a narcissistic age” and the final image of the stars as “God’s mistakes” are unforgettable.

Stevenson excels at the precise delivery of pointed lines, but seems a little less comfortable with the play’s zannier comedy. When the audience pisses itself, she seems to be pissed off that she has to pause to let the laughter subside. When she embraces an emotional moment, though, you can almost feel the heat coming off the stage. Likewise, Lydia Wilson is great as the needy and aggressive Phoebe and Johnny Flynn is the loveably gormless Ben. In support, James Fleet plays Kevin and Adrian Hood the eccentric Geoff. Despite a couple of awkward moments, plus an ending that is deliciously unnaturalistic, The Heretic is a thrillingly funny and satisfying comedy drama.