Home » Blog » About The Big Fellah

About The Big Fellah 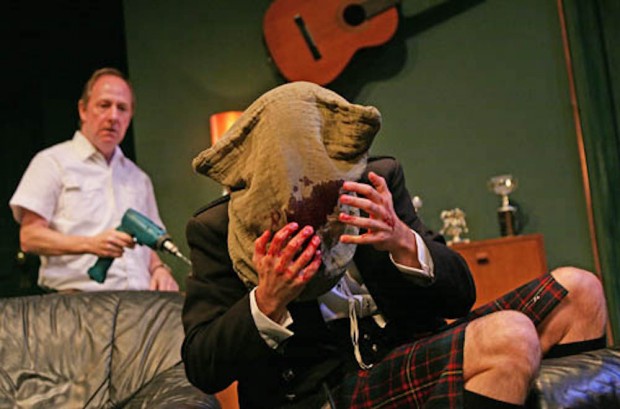 The Big Fellah is the latest play from Richard Bean, who is perhaps — and especially following the fuss about his England People Very Nice last year — British theatre’s most provocative playwright. This time he takes a typically comic look at American supporters of the IRA, showing how the New York based Costello, the big fellah of the title, recruits IRA members, raises money for the Republicans and organises shipments of arms to Ireland. The set is Michael’s Bronx apartment (designed by Tim Shortall), a safe house, where money raised for the IRA is counted and armament shipments organised. Visitors include the hippy Karelma, the activist Elizabeth, the psycho Frank and local cop Tom Billy. As the years pass, it becomes obvious that the FBI have a spy in the New York cell, but who is it? Bean’s play is very funny, full of sharp contrasts between grim hilarity and gut-wrenching reversals. Yet the comparisons he makes between Irish terrorism and Muslim fanaticism are highly questionable, and his cell retains its support of violent Republicans despite the Peace Process. In the end, the final scene suggests that Republican supporters among the New York police and fire service deserved to perish in the 9/11 attack. Those that live by the sword die by the sword. Max Stafford-Clark directs with clarity and truth, dwelling on Bean’s wonderfully eccentric characters, such as Fred Ridgeway’s Frank and Youssef Kerkour’s Tom Billy, but also allowing Finbar Lynch to squeeze the most sympathy out of the title role. As Ruairi and Michael, Rory Keenan and David Ricardo-Pearce are always convincing, while Stephanie Street and Claire Rafferty make the female roles perfectly believable. Whatever your misgivings about the play’s taste, its bitter humour and tense ending more than justify the production. But what’s this? I’m looking at the list of tour locations and there are no shows booked for Northern Ireland, or in the Republic for that matter. Surely, now that Derry has been declared the UK City of Culture (2013), this would be exactly the sort of challenging play that Republicans and non-Republicans could appreciate. Following the end of the Bloody Sunday Inquiry, it would also be relevant. So why isn’t it touring to Northern Ireland?