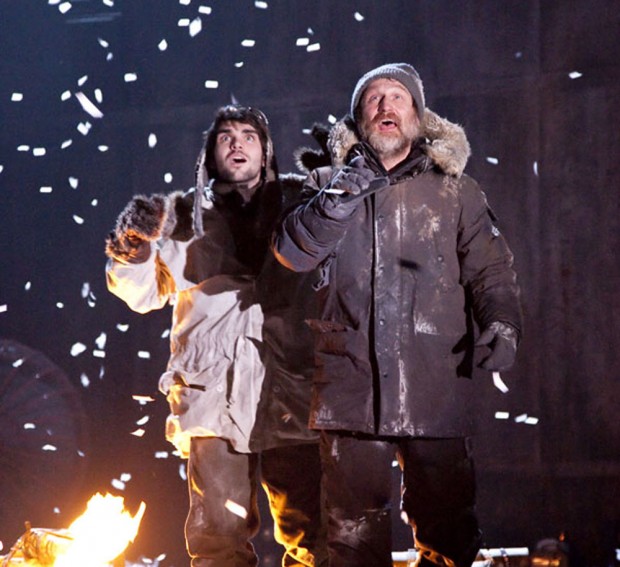 British theatre prides itself on being contemporary, up to date — in a word, hot. So it’s odd that, over the past decade, there have been so few plays about climate change. While everybody, and I mean everybody, has been talking about global warming (hot, hot, hot), while climate-change deniers have been branded the new fascists, and while well-publicised protesters have tried to stop electricity stations from functioning, British playwrights have — with only a couple of exceptions — blithely ignored the subject. So at first sight this new play, which opened tonight at the flagship National Theatre in London, is to be welcomed.

Climate change is a big topic, so Greenland is a big play. So big, in fact, that it has needed four playwrights to write it: Moira Buffini, Matt Charman, Penelope Skinner and Jack Thorne. It’s also big in ambition, big in content and big in theatricality. Likewise, it has some big problems too. But first the good news: this is a play that takes climate change seriously, but with a human perspective — there are very few windy generalisations, and there are regular brief showers of humour to moisten the potential aridity of the subject matter.

There are three main stories: one is the tale of a young lad from Walthamstow who becomes an expert in arctic birds, and sees the effects of climate change on their behaviour. The second is the story of Lisa, a young would-be activist who drops out of college and joins a protest group, where she meets Dav, a militant guy. The final one is about Dr Ray Boykin, a scientist who models climate patterns, and fears that the future will be far worse than we imagine it. When he meets Phoebe, one of Ed Miliband’s advisers, and joins her at the 2009 Copenhagen UN Climate Change Conference, he witnesses the limits of a political solution to the world’s problems.

As well as these distinct strands, there are plenty of vignettes: two engineers from Mali explain their take on Copenhagen; a young black guy meditates on choice; two lesbians quarrel about guilt and militancy; activists embark on direct action. Similarly, there is a host of theatrical effects, from direct address to vivid projections, from flashing strobes to huge percussive effects, and from multiple-choice questions to rain storms made of paper. And there’s a real rain storm too. And flashing birds flying around the auditorium, and airborne supermarket trolleys. Pop songs — “It’s Raining Men”! — make the heart beat faster (well, sort of). Best of all, the entry of a polar bear is the piece’s most wonderful surprise.

Now the bad news. While the play offers plenty of variety, most of what it tells us we already know. The tension between wanting to live a peaceful life and being alarmed by intimations of future catastrophe is familiar and not compellingly dramatised. In fact, the play is full of good-hearted meditations on choice, hope, belief, the power of science and the debate between whether to trust politicians or to take matters into our own hands. Sadly, these are meditation lite — unlike, say, Drew Pautz’s Love the Sinner, the play never really finds a compelling dramatic image to clinch the argument. The structure is a mess, and most of the potential metaphors have, like the ice caps, melted clean away.

There is also another problem with Bijan Sheibani’s production, and Bunnie Christie’s design, a problem which could be described as the curse of Rupert Goold. Ever since Goold’s triumph with Enron, other directors have been tempted to use similar theatrical effects, with markedly less successful results. The flying supermarket trolley is a particularly clichéd image. Oh well, never mind (except that I do). A large ensemble cast, and some fine individual performances, means that Greenland is two hours of fitfully engrossing, sometimes funny, occasionally frustrating, rarely striking, and never really overwhelming debate that at worst feels like a lecture, and at best a soothing balm for liberal audience members who’d like to be challenged, but just not very much. Perhaps that kind of soft socialism says something about our political climate.