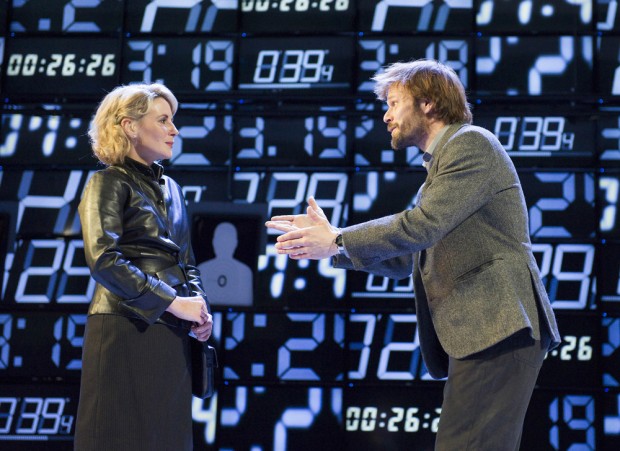 Because of the instability of the present there’s always a faint whiff of nostalgia for the old certainties of the past. And the Cold War era has its very own allure. This can be seen in two current successes: that of the revival of Tom Stoppard’s 1988 play, Hapgood, and of a new play by American playwright Mia Chung, You for Me for You, which takes a look behind the bamboo curtain at North Korea. When it was first staged, Stoppard’s play was widely seen as incomprehensible, with a labyrinthine plot which puzzled not only the characters of the story itself, but audiences as well. And Cold War certainties are surely not so comforting if they are, well, uncertain.

The story starts with agents from Britain and the Soviet Union attempting to double-bluff each other during a briefcase drop at an English municipal swimming pool. The scene is scripted like a mixture of farce (lots of doors opening and closing) and card trick (now you see it, now you don’t). A bit like the first scene of The Real Thing, it is beautifully conceived as both a theatrical delight and a good way of capturing the audience’s attention.

This swimming baths scene is a sting operation, organised by Mrs Hapgood, the chief of British intelligence (known to her staff as Mother) who is trying to find the mole in her organisation. The prime suspect is Kerner, a Russian physicist who is also her close friend. He now secretly works for the Brits, passing disinformation onto Moscow, or is he in fact a double-double agent? His scientific obsession is particle physics, and the fact that any phenomenon can have two interpretations. If this is true in the specialist sub-nuclear universe of science, then might it not also be true in the more mundane world of spying?

Prompted by the visiting CIA agent Wates, Hapgood’s boss Blair (yes, really, a touch of foresight this), casts his eye also on the other suspects, who include Ridley, another agent, and Hapgood herself. So is the traitor Kerner, Ridley or Hapgood? Or all three? Or Blair himself? Two other members of MI6, Merryweather and Maggs, make up the cast. On the domestic front, the single mother Hapgood takes time off to visit her son, Joe, a public schoolboy who, to his evident embarrassment, she insists on watching on the rugby field.

You can see why the figure of the scientist Kerner fascinates the cerebral Sir Tom. Like his masterpiece Arcadia (1993), this is a play about the mysterious world of quantum physics, where a particle can be a wave or a pulse, or in two places at the same time. So there are a couple of beautifully elegant speeches about quantum physics which glow with Stoppard’s interest in the ambiguities of these ideas. But although he says that the events of the spy story are just a metaphor for the science in the play, to me it seems like exactly the opposite. Ideas about duality and doubles are stronger in the espionage story than in the scientific discourses.

The link between these quantum physics ideas and the spy story are ambitious and bit tenuous. But the ambiance of the British secret services, and especially the figures of Blair and Hapgood herself, are beautifully realised and the play says a lot about our national identity on the eve of the Fall of the Berlin Wall. Like many playwrights, Stoppard seems to have been a bit of a prophet, suggesting that the days of the Cold War are numbered. Maybe it was his support of Charter 77 and other dissidents behind the Iron Curtain that gave him that feeling. One of the best passages is an amusing and convincing deconstruction of the science behind the much-hyped American Star Wars programme. Yes, the cowboy President Reagan loved this idea, but was it ever really practical? Another speech amusingly deconstructs the spy story genre. Very clever.

Howard Davies’s warmhearted and ultimately heartbreaking production has a good design by Ashley Martin-Davis and lovely video projections by Ian William Galloway, as well as sympathetic performances by Lisa Dillon (Hapgood), Tim McMullan (Blair), Alec Newman (Kerner) and Gerald Kyd (Ridley). Dillon is particularly good at suggesting workplace steel and domestic wooliness. If the final result — which is meant to show that “the act of observing determines what’s what” — doesn’t quite work, and I really can’t pretend to have understood all of it, this is still an interesting evening. I am sure that it is nowhere near as theatrically compelling as Arcadia, but also that it is a very watchable trip down memory lane.