Home » Reviews » You for Me for You, Royal Court

You for Me for You, Royal Court 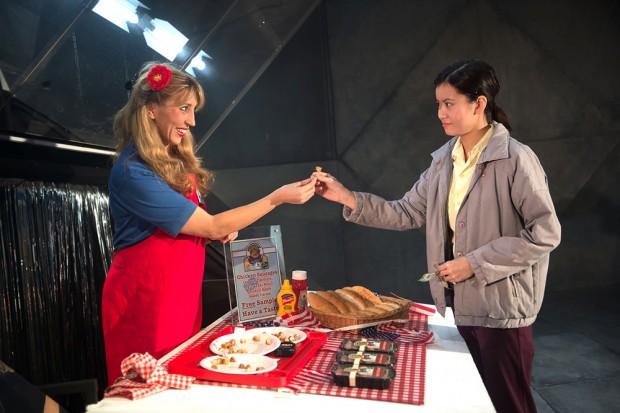 North Korea is the kind of place that haunts the imagination of the West — and not in a good way. One of the last hardline Communist dictatorships, it is also a country of immense sadness, a landscape of food shortages and human-rights abuses. Yet its regime calls this dismal place the “Best Nation in the World”. To us, it’s a secret world, a strange culture difficult to comprehend, easy to fear. Small wonder that, in American playwright Mia Chung’s 2012 play, two hungry sisters fantasise about leaving it for good.

In the first scene the older sister, Minhee, and her sibling Junhee are celebrating the new year, but the cupboard has been bare for a long time, and their repast is depressingly meagre. As each tries to persuade the other to eat more, the theme of sisterly sacrifice is introduced. Soon after, when they arrive at the border with China, they have to decide which one will cross first. In the event, they are separated, and the rest of the play tells two parallel stories, following each of the sisters on their individual quests.

In a flash during which the space-time continuum is torn, Junhee finds herself in the United States, and struggles to make a living and then save enough money to return to North Korea to find her sister. Meanwhile, Minhee searches the country for her lost son, her lost husband and her lost life. These two parallel stories develop with all the dream logic of nightmare and fantasy, memory and imagination. It is a surreal and satirical evening, in which the two very different societies are both criticised. While the fast life of America is contrasted with the limitless waiting of North Korea, and endless choice with no choice, there are some lovely moments. Trees grow ears in a humorous visual metaphor of the surveillance state, and Junhee’s confusion on arriving in the Land of the Free is shown using the device of having the American characters speak gibberish, which she struggles to comprehend. The rhetoric of politically correct obedience in both North Korea and America is amusingly parodied.

One vivid creation is the monstrous American Liz, a caricature composite of people that Junhee encounters as she starts work in New York. Elsewhere, as the stories freewheel along, we are introduced to musical rice, larger-than-life teddy bears and Wade, a black American newcomer from the South. At one point, rice (yes, rice!) performs a choreographed Busby Berkeley dance, while at another a field of Kimjongilia flowers need harvesting.

But while I admired the imaginative flair of this magical realism, I was also conscious that the element of fantasy made it hard to connect with the deeper emotions of the people in the story. When anything is possible, what’s at stake? In this postmodern universe, the leaps and bounds of the narrative are enjoyably impressive, but I felt an absence of profounder feeling. For me, this is a show that is more entertaining than moving – and that feels a bit wrong. So maybe You for Me for You is simply not for me.

On the other hand, it is hard to fault Richard Twyman’s well-judged and colourful production, which zips along for 90 minutes, criss-crossing the globe with amazing ease and a full technicolour palette. Sporting a versatile mirror set by Jon Bausor, and super video projections by Tal Rosner, there are endless delights for the eye. At the same time, Harry Potter star Katie Leung (Junhee) and Wendy Kweh (Minhee) explore the intense relationship between the sisters, while Daisy Haggard and Paapa Essiedu give life to Liz and Wade. In support, Kwong Loke and Andrew Leung play a dozen characters, from frog to disembodied voice. In the end, this is a play that appealed more to my eyes than to my heart.