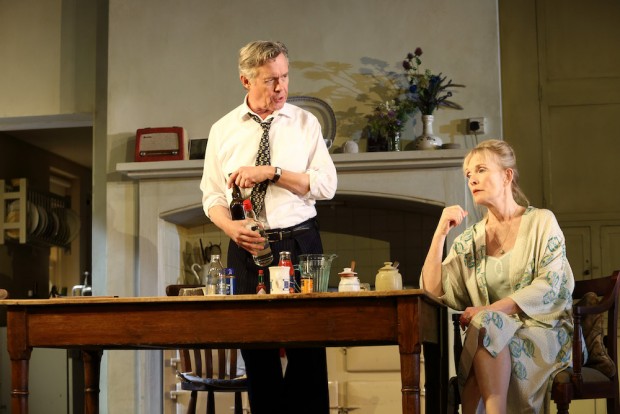 In the current feverish atmosphere at Westminster, with arguments about Brexit becoming increasingly shrill, the time is right once more for political theatre: serious plays about serious issues. Oddly enough, however, while television has effectively dramatized the current crisis, in films such as Channel 4’s Brexit: The Uncivil War, theatre seems to take a more oblique approach by setting its stories in the past. So James Graham’s perennially interesting This House was set in the late 1970s, while Hansard, actor Simon Woods’s smartly-written debut play, which gets an astonishingly generous production on one of the National Theatre’s main stages, is set in the late 1980s.

To be precise, and Woods is very precise, it is set on Saturday, 28 May 1988. We are in the spacious kitchen of a Georgian house in Oxfordshire, and it is immediately clear that this is a two-hander, powered along by impeccable performances by its super-stars Alex Jennings and Lindsay Duncan, about a marriage in crisis. Jennings plays Robin Hesketh, a Tory junior minister who went to Eton, Oxford and the bar, while Duncan is his dypso wife Diana. Despite the fact that the morning is quite advanced, she is still in her dressing gown, nursing a hangover. The two are sparring well: this is not a very affectionate marriage.

Diana’s current unhappiness is obvious, but Robin’s is more concealed. He believes in the traditional upper-class stiff-upper-lip, while she is more emotionally articulate. As their argument develops, it becomes clear that this is a game they often play, each enjoying their witty ironies and their caustic sarcasm. Gradually, their differences spring more sharply into focus: while he is an Old Etonian with a public-school attitude to parenting and has just voted in favour of Thatcher’s Local Government Bill — with its notorious anti-gay Clause 28 — she is much more liberal, a Guardian reader with more humane attitudes to both kids and gays. The clash between homophobia and tolerance echoes around the action.

Jennings and Duncan play this Strindbergian game with enormous conviction, despite the slightly incongruous fact that two such different individuals could ever live together. Jennings exudes a cool grey charm, with masses of confidence, while also displaying the unbearable clumsiness of privilege. At the start, his glasses give him a myopic look vaguely reminiscent of Geoffrey Howe, but gradually guilt invades his features. After all, where does he spend the night when he’s not at home? What is he hiding? At the end of the evening, he has long abandoned his glasses and most of his psychological armour. It feels like he is naked.

Similarly, Duncan begins the play with an arsenal of irony and sarcasm, giving voice to a kind of exasperated pessimism. Slowly, her vulnerability comes to the fore, and she clearly has a plan: why, after all, has she got the old home movies out (what point does she want to make about the way they have brought up their own son?). Despite the fact that she looks like she’s had a rough, drink-sodden night, there’s a glint in her eye, and a steel in her manner. Today, she is on a man hunt. Whereas Robin sees Hansard, the verbatim reports of proceedings in parliament, as basically an archive of his small contribution to history, she brings out her own alternative record: an incriminating diary.

Woods writes with wit and clarity, and the play begins with some comforting jokes about the Cotswolds and some less comfortable ones about cancer. Although this drama is set in 1988, it is written with today in mind: Robin is strongly right-wing and contemptuous of identity politics, while Diana’s attitudes are excitingly critical of Tory rule and the entitlement of the upper classes. At first, there are some good laughs (with good digs at Labour too), and plenty of Eng Lit references, and then the mood darkens. There’s a great note of scepticism about Conservative ideology in the Thatcher years, although Woods is careful to be equally sympathetic to both his characters. It’s a fine balancing act.

Like many plays about the problems of upper-middle-class marriage, Hansard is also about Englishness, about national identity. A key line is Diana’s early jibe: “It’s the great mystery of our time: the insatiable desire of the people of this country to be fucked by an Old Etonian.” Yet Woods also writes about Robin with great empathy and he is no cardboard villain, often getting even better lines than Diana. So although this is not an example of that almost legendary creature, the right-wing play, it does provide 1980s  Thatcherism with a very human face. At the same time, it also shows how attitudes to parenting are often ideological and how difficult emotions are thrown up by the gap between our view of ourselves and how we react to difficult family situations.

Unfortunately, the final revelations in this 90-minute play come about 20 minutes too late, and Woods’s inexperience shows: he has simply not given himself enough time to fully excavate the psychological conflicts that he has so neatly introduced. Thus although there is much to enjoy in this debut, its ending seems oddly incomplete and perfunctory. It’s as if there are an additional 20 minutes of argument missing, which even Simon Godwin’s excellent directing and the best efforts of Jennings and Duncan cannot conceal. If Hildegard Bechtler’s set is gentle on the eye, and the overall production values are high, it still feels as if this debut is rather over-exposed on a big stage. Still, Woods is now a writer to watch; and I shall be looking out for his next one.