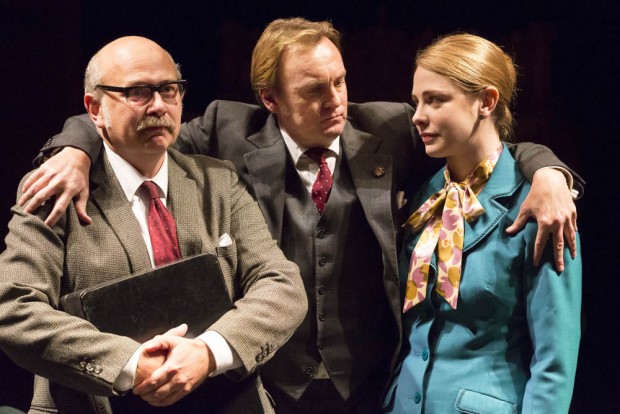 Over the past few years, the 1970s have made a cultural comeback. On television, there’s been Life on Mars and White Heat, in the bookshops tomes by Dominic Sandbrook, in the theatre revivals of plays such as Mike Leigh’s Abigail’s Party, all to the soundtrack of Ziggy Stardust and the Spiders from Mars. The decade that time forgot has become the decade you can’t escape. But can a documentary about the Westminster politics of 1974-79 really make gripping drama? At first the signs seemed almost positive. After all, the cast includes Philip Glenister — Mr Life on Mars/Ashes to Ashes — and the live soundtrack features David Bowie (as well as a spit-spatter of punk chords). There was also some backstage drama, as Phil Daniels, who was due to play the Labour whip Bob Mellish, had to pull out due to a bereavement. But pretty soon it’s clear that James Graham’s new play is a documentary that is very much a specialised interest.

It takes place in the House of Commons during the 1974—79 Labour government. The protagonists are not so much the major politicians — Heath, Wilson, Callaghan and Thatcher — but the whips, the behind-the-scenes team responsible for getting MPs to vote for or against the government. And as we all know, if the government loses a vote it can’t pass the law being voted on; and if it loses a major vote, it is vulnerable to a vote of no confidence. If it loses that, it falls.

Okay, it’s not quite as boring as it sounds. This was a tumultuous decade, with runaway inflation, huge strikes and massive social change. It was a time that made us who we are today (at least, that’s what the ubiquitous Sandbrook can be relied on to argue). And at Westminster there was a hung parliament and then a minority Labour administration that had to make deals with fringe parties, like the Liberals and Scottish Nationalists, in order to govern. This made every vote a potential disaster.

At the heart of the play are the two teams of whips. On the Labour side, there’s doughty Michael Cocks and his sly old dog of a deputy, Walter Harrison (played by Glenister). Bob Mellish, now played by Andrew Frame, Joe Harper and the only woman in the office, Ann Taylor, make up the rest. Yes, I’d never heard of them either. Well, apart from Taylor, who went onto greater things and is now a Baronness in the Lords. On the Tory side, there are some wonderfully arrogant public school types with Yes, Minister names: Humphrey Atkins, Jack Weatherill and Fred Silvester. In their office, it’s no surprise to encounter an ex-military man — and grown men tremble for fear of offending Thatcher.

The play then shows us the various tricks involved in getting the bodies of MPs through into the lobbies during voting times. One of the many arcane points about our unwritten constitution is that MPs have to be physically present for their vote to count. So for a while there’s a traditional gentleman’s agreement that sick members of one party can be paired off with members of the other so that no one has an advantage. But when the Labour whips twist the rules, an incident immortalised by the image of Michael “Tarzan” Heseltine waving the ceremonial Commons mace around his head, the pairing system is scrapped, and every MP has to attend each vote. Then people are wheeled in from their sick beds, after operations, and while still breastfeeding.

Clearly, this is also a play about national identity, as the following lines make clear: “This country doesn’t need a constitution, never has, never will. We have history as our guide. In tough times, the British do what we have always done. We muddle through.” But it also alludes to the human cost of muddling through, and in one powerful stage image — when Harrison’s outstretched hand is refused by his Tory counterpart, we vividly see the destruction of the legendary postwar political consensus.

There have been other plays about parliamentary whips — notably Steve Thompson’s hilarious Whipping It Up (2006) — but none that have been so reminiscent of a BBC Four documentary. This is a play about mechanics, not ideas. It is about process, not policy. It is, oddly enough, a political drama without much politics. Certainly not enough for me. And it is a docudrama without much drama. I was interested in the subject, but not much in the characters. With so many incidents and votes to cover, there was never enough time to dwell on individuals.

With a three-hour running time, this trip to a past when Labour whips were uneducated workers and Tory whips were public-school toffs doesn’t really resonate with Coalition politics today, and none of its metaphors excited me. Jeremy Herrin’s production has a couple of lame sub-Enron effects, but his cast do work hard regardless, especially the Labour team of Glenister, Vincent Franklin (Cocks) and Lauren O’Neil (Taylor), and there are some good cameos — notably Helena Lymbery as a backbench trouble-maker. On a set that includes audience accommodation on the green benches of the Commons, you can pretend to be an MP. The dialogues are good, the atmosphere is quintessentially British, there are some enjoyable jokes, but the evening ends on several votes short of a triumph.