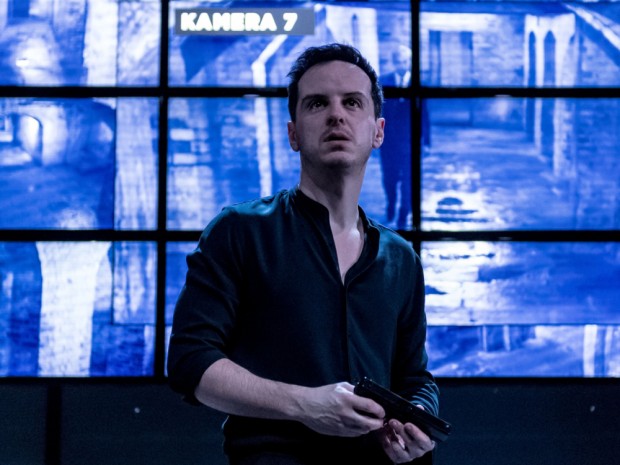 After a sellout run at the Almeida in March, Hamlet transferred to the West End in June so I’m just a little bit late for this particular party. Still, it’s always fun to see a show on a normal night, with normal punters, and without all the hype of a press night. It was refreshing to see so many young people in the audience. And the show, directed by Robert Icke, really is a party. It’s fresh, it’s stylish, it rocks and it stars Andrew Scott, whose interpretation of the Prince of Denmark is a nice contrast to that of Benedict Cumberbatch’s 2015 version (as the adversaries of the BBC’s Sherlock square up to each other on stage as well as on the television).

The modern-dress version opens with television screens giving us a glimpse, in Danish, of the backstory of young Hamlet and his father’s untimely death. This has a touch of Scandi-noir about it, and Hildegard Bechtler’s chic set is styled like a five-star nordic hotel. The glass panels glide smoothly and the simple furnishings breathe an air of privilege and power. It’s very functional, very Arne Jacobsen. But, as was the case with Nicholas Hytner’s National Theatre version, one of the key themes is surveillance. The ghost of Hamlet’s father is first glimpsed on CCTV, and the constant eavesdropping in the play is quietly emphasized. Amid the cool riches of this court, there are spies and betrayals aplenty.

Into this chilly ambiance, Icke brings splashes of passion. At the beginning, his Claudius and Gertrude are constantly embracing, obviously in lust as well as in love, while Polonius and his children, Laertes and Ophelia, convey a real sense of family life, with its irritations as well as its strong bonds. After a slow start, during which Scott conveys perfectly Hamlet’s shocked and depressed state, this most conversational of Princes gradually warms up, until his heated reactions begin to rock the foundations of the state. Scott convincingly explores the lines, constantly suggesting a deep intelligence at work, and often making them sound fresh and thrillingly new. It is a witty, sometimes delicate, occasionally frantic, performance that exhales a sense of emotional truth.

Icke peppers the evening with pauses, and Scott’s charismatic presence also makes use of this device, wrong-footing some of our expectations and coming up with surprising twists in the soliloquies. What’s so impressive is the clarity of the production, with its emphasis not only on Hamlet’s journey, but also on Gertrude’s growing recognition of her new husband’s guilt. I really like the Murder of Gonzago scene, with the royals sitting just in front of the audience, their reactions projected on video screens, and Claudius’s walkout results in a meta-theatrical interval. I also love the final ghostly scene as the dead characters are reunited in the afterlife. I’m less keen on Hamlet’s intervention in Claudius’s confession, which really doesn’t make any sense.

A lot of the visual impact of the play comes from the video screens and the armed security staff, which convey the sense that Hamlet’s options are limited. When Ophelia cracks under the strain, she is brought on in a wheelchair with rubber wrist restraints, a pathetic figure. Rosencrantz and Guildenstern are played by a man and woman, which adds a twist to the Prince’s lines about loving them, and the final scene is well set up: it really does look like a rivalrous but friendly fencing match, until the treachery is revealed. At almost four hours long, with one interval and one briefer pause, this will never be the easiest of plays to get through, but that’s the bard’s fault rather than Icke’s.

Of the rest of the cast, I was most impressed by Peter Wight’s convincingly fussy Polonius, Derbhle Crotty’s self-possessed Gertrude, Jessica Brown Findlay’s flirty but vulnerable Ophelia and Barry Aird’s droll Gravedigger. For me, Angus Wright’s rather grey and monotonous Claudius doesn’t convey the character’s sharpness as a political operator. I like the Bob Dylan songs; I like the simple but effective staging; I like the storytelling. All in all, I think that this production sets a standard for contemporary versions of Shakespeare that others will seek to emulate. It’s a five-star show that will make perfect sense even to those who don’t know the play.