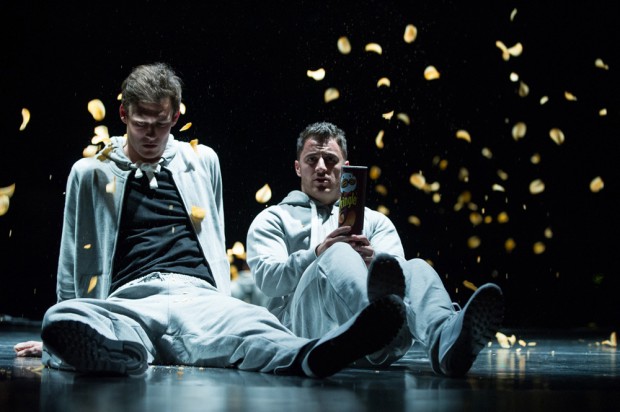 Rikki Beadle-Blair is a high-energy polymath. He’s a real phenomenon. Raised by his lesbian mum in sarf London, he wrote his first play at the age of seven and was, he claims, already directing four years later. Nowadays he creates challenging entertainment in film, education and theatre (18 new plays in six years). He also writes self-help books. His heart’s clearly in the right place. There’s only one problem — he’s not a very good playwright.

Gutted, his latest trip down to the council estates of South-East London, is a family drama. It’s a grim tale of an Irish cockney matriarch, Bridie, and her four white working-class kids: Matthew the Millwall footballer, Mark the market stall-holder, Luke the handsome entrepreneur, and little John, a convert to Islam. Together with their black spouses, they are a fearsome bunch, and Beadle-Blair shows what happens when each of them hits the buffers after Matthew, the oldest, gets out of rehab.

The main problem with the play, which Beadle-Blair also directs, is that there is too much ghastliness and too much mess. The storytelling is almost Victorian in its melodrama: dramas clash with explosions of anger which bump into other dramas. As the focus shifts from one brother to another, there are numerous flashbacks and blind alleys. Admittedly, there are a lot of funny lines, and some acute insights into damaged lives, but the story meanders and rambles until it reaches its climax (a dangerous word in a review of a play with several ejaculations). At this point, having spent almost three hours in the company of this gruesome family, you could justifiably feel that you didn’t want to know any more. So what does Beadle-Blair do? He produces a didactic lecture about fate and free will, wagging a finger at all of us about personal responsibility and our ability to change. I’ve always hated being lectured in the theatre, so this was a low point for me.

The play does have its dirty pleasures. There are some good jokes about youthful sexuality (the boys have a wanking contest) and some of the family relationships are explored with a mix of truth and power. Beadle-Blair’s writing has a vigour, vitality and crudity that is occasionally gobsmacking, and sometimes hilarious. He talks sense about sex (there’s a paean in praise of pussy), but the psychology is not always convincing and the messy storytelling is constantly frustrating. In compensation, the directing has energy and the cast are clearly enjoying themselves: James Farrar, Frankie Fitzgerald, Jamie Nichols and Gavin McCluskey play the four brothers, while Louise Jameson is their hard-as-nails mum. Jennifer Daley, Sasha Frost, Dominique Moore and Ashley Campbell provide the love interest. It all amounts to a lurid love letter to South London working class life, as bright as a caricature and about as convincing as Disney.