Home » Blog » About Matilda the Musical

About Matilda the Musical 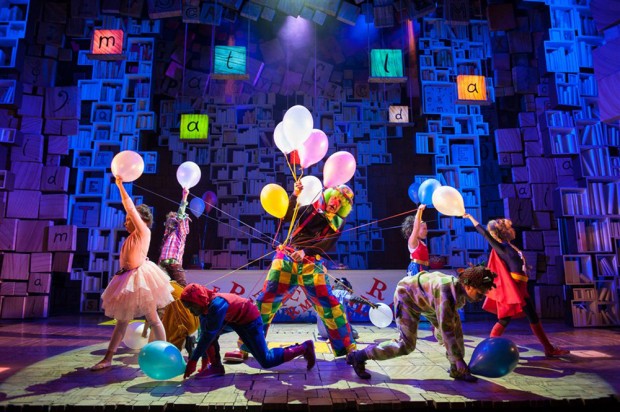 Yesterday, I finally saw Matilda the Musical, the RSC production at the Cambridge Theatre. I’d been told that it would be an evening of joy — and it was. With music by Tim Minchin and book by Dennis Kelly, it is one of the most moving and exciting shows I’ve ever seen. It’s also a great example of theatre adaptation by one our most versatile playwrights: Kelly’s task was to turn a well-known and well-loved original text into the rather constricted format of an single evening’s entertainment. Kelly follows the broad outlines of the original source material — Roald Dahl’s 1988 children’s novel Matilda — in terms of an overall story arc, but then makes numerous additions of humorous incidents and jokes, as well as tackling one of the fundamental problems of his source: the fact that it is a book about books. In the original, Matilda finds relief from her uncaring parents in the local library. Despite the fact that her parents despise learning, Dahl’s wunderkind, at the age of three, has already taught herself to read by studying the newspapers and magazines that lie around the house. By four, she is ready for Charles Dickens. Helped by Mrs Phelps, the librarian, she begins to explore the canon of Eng Lit. By the end of chapter one, entitled “The Reader of Books”, Matilda is seen in her bedroom, which she has turned into a reading room. Along with a hot drink, usually a mug of chocolate, she explores the worlds of Dickens, Jane Austen and Ernest Hemingway. The book’s illustration by Quentin Blake shows her rapt over a large volume balancing on her knees. This is touching and evocative, but contains within it a major problem for any stage adaptation: it is a static image and, in terms of dramatic action, a boring one. Kelly’s solution is to change the passive image of the solitary Matilda reading on her own into the active image of Matilda telling a story to Mrs Phelps. To increase the dramatic content of this change he also splits up Matilda’s story into four episodes so that Mrs Phelps, and of course the audience, look forward to seeing how this narrative unfolds. To give the story a dramatic punch, he also plays with the idea of whose story it actually is. By the end of the musical, it is this story, told by Matilda and full of emotional truth, that stays with you.