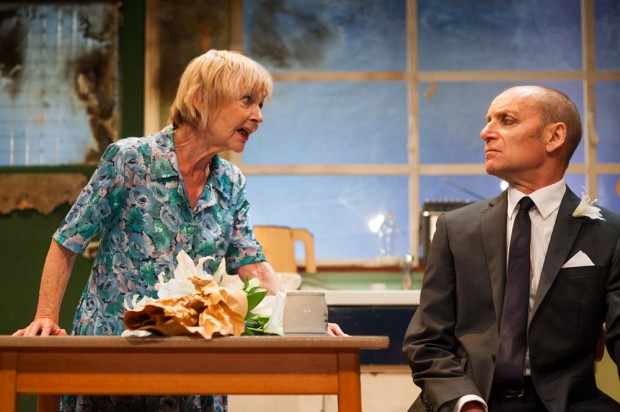 Few contemporary playwrights have enjoyed as many revivals as polymath Philip Ridley. The first two of his 1990s gothic East End trilogy — The Pitchfork Disney and The Fastest Clock in the Universe — have recently (ish) been staged again to great effect and now it’s the turn of the final play in the trilogy, Ghost from a Perfect Place. When it was originally put on at the Hampstead Theatre in 1994 it shocked audiences with its full-on violence. But what is its impact today?

Set in a badly scorched flat in the East End of London, designed by Anthony Lamble, the play opens with 76-year-old Torchie Sparks, a granny with a bandaged leg, being visited by Travis Flood, a one-time gangster from the 1960s era of the Krays. He’s been away for many, many years and is looking for Torchie’s granddaughter Rio, a young woman who sells sex for a living. As oldies, Travis and Torchie can’t help but lament how things have changed for the worst since the bygone “heydays”, the “perfect place” of the play’s title. But this is definitely not a nostalgia fest. When Travis finally meets Rio, he finds that she is the leader of a girl gang — whose other members are called Miss Sulphur and Miss Kerosene — and more than a match for this man of violence. In an excruciating torture scene, the old man of yesteryear confronts the youngsters of today. And gradually the terrible truth of all of their relationships seeps out, like blood from a cluster of unhealed wounds.

Ridley’s writing is as poetic as you’d expect from this master of the visual image, and as punchy and pungent as the burnt-out flat in which the story takes place. He skillfully blends black comedy with blazing imagery and the scene in which the gang worship Saint Donna (Rio’s mother) is brilliantly imagined and wonderfully blasphemous. There’s a real zest, a really dark fuel which powers this play, which, like a Greek tragedy, is both elegantly structured and metaphorically rich. Yet Ridley never neglects the emotional reality of his characters’ lives.

The story enacts female revenge on the strutting male entitlement of old-style machismo. As events move towards their symbolic climax, it becomes clear that men must not only pay for the sins of now, but for the sins of the past. As well as a celebration of girl power, Ghost from a Perfect Place is also a play about the chronic dangers of nostalgia, and the way we use fantasy, telling tall tales about ourselves and our pasts, to avoid facing the truth. All the characters spin fantasies about their lives. When you decipher the play’s final revelations what emerges is a drama which shows how the self-sacrifice of a teenager saves the lives of the parents, while at the same time a senior citizen has to atone for crimes committed earlier in life. There’s an ethical symmetry in the core relationships which feels both just and gratifyingly right. If the play seemed like a provocative shock-fest on its first outing, it now feels more like a deeply moral tale.

This thrilling production by Russell Bolam, who also directed Ridley’s Shivered in 2012, is faultless and his cast does him proud. Michael Feast’s Travis is a rough diamond and when he meets Rio’s gang his charm turns into a convincingly snarling rage. By contrast, Sheila Reid’s Torchie is both granny and matriarch. As the youngsters, Florence Hall (Rio), Scarlett Brookes (Sulphur) and Rachel Redford (Kerosene) are both fiercesome and vulnerable. With its exciting incantations and memorable imagery, its set pieces and vivid snatches of poetry, this really great evening in the theatre proves that the play is a contemporary classic. See it!