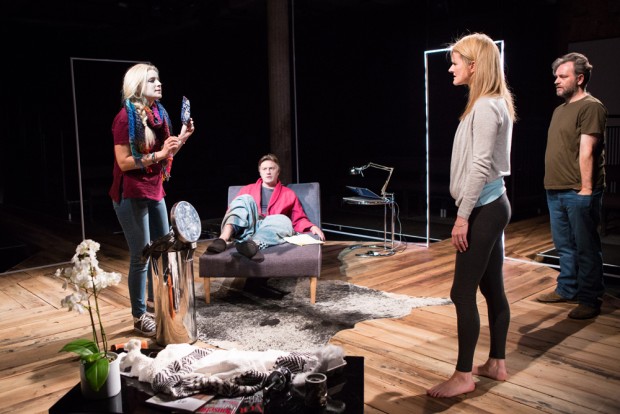 With the election of lefty outsider Jeremy Corbyn to the Labour leadership, are we entering a new era when upsets and surprises have become a new way of life? Is it really true that anything is now possible? Well, it certainly feels like that. As if to engage with these pressing questions, Tanya Ronder’s new play is all about how a perfect family is suddenly visited by some totally unexpected events. What starts with a dodgy doorknob escalates over 90 minutes into a full-scale domestic breakdown.

The perfect family is composed of Gordon, his second wife Serena, and their young daughter Rachel. While the confident, if emotionally illiterate Gordon works for a huge energy company and is about to be promoted — his salary will be £2.4million (don’t tell Jeremy) — Serena is training to be a teacher of what she describes as “a mixture of tai chi, yoga and Pilates”. This golden couple suffer from all of the usual problems of a cash-rich but time-poor situation, and they are just about to move house to a huge new riverside abode. But, from the beginning, the stresses of their situation are expressed in the rapidly growing cracks in Gordon’s brittle persona.

In what initially feels like an absurdist drama, everything that Gordon touches turns to rubbish: light bulbs blow, a glass smashes, his phone won’t charge. He starts to imagine that the drains are blocked; the smell of shit torments his nostrils. At the same time, Rachel’s toy polar bear goes missing. Where is it? And why is Gordon acting more and more strangely? Okay, you can see the symbolism: he is an energy hotshot and he’s become obsessed with his child’s beloved polar bear — an emblem of the climate change that he is helping to cause.

To further complicate matters, his brother Clarence — a recovering drinker and drug addict now working as a house painter — arrives. He wants to do Gordon a favour by painting parts of the house before potential buyers come to view it. Because he is so much poorer than his high-flying brother, he has something in common with Blundhilde, the couple’s young Icelandic au pair, who is the most exploited worker in the household. On one level, this is a story about brotherly love, or rather the lack of it.

At the centre of the play is a clash of lifestyles: on the one hand is the rich middle-class couple who consume huge amounts of energy and who have bought into the need for an ever-expanding oil market. On the other hand, there are Blundhilde and Clarence, individuals who struggle to live a simpler life. This involves constant recycling, buying fewer goods, and protesting against fracking. As Gordon’s life begins to spiral out of control, there is the chance of a Jeremy Corbyn moment: the completely unexpected might just be possible.

Ronder’s play is an odd hybrid, partly a family farce — with polar bear suits, an escaped hamster and flying eggs — and partly a play of ideas. The trouble is that all the ideas have taken the place of psychological plausibility or the creation of credible characters. Farcical incidents and heavy symbolism have elbowed out sensible debate and the fact that both Gordon and Serena are unattractive people makes it hard to care about their plight. They are just too comfortable, and too confused. And even the anarchists turn out to be too over-the-top to be credible. Satire blots out humanity. At this venue, Nancy Harris’s Our New Girl explored similar territory in 2012 — and did it so much better.

As the symbolic giants of corporate life eat up the family, Caroline Byrne’s production (neatly designed by Chiara Stephenson) comes fitfully to life, but she’s just too inexperienced to impose a coherent style on the show. It certainly sports a great set by Chiara Stephenson, a frame outline of walls and doors that lights up, fizzes, flashes, purrs and sputters. This is like a character in its own right. Andrew Whipp and Susan Stanley play the unlovable Gordon and Serena, while Salome R Gunnarsdottir (making her London debut) and Jon Foster are equally good as Blundhilde and Clarence. On press night, Bella Anne Padden was Rachel. Fuck the Polar Bears is fun in parts, but the writing is just too superficial, clichéd and incoherent to be truly inspirational.