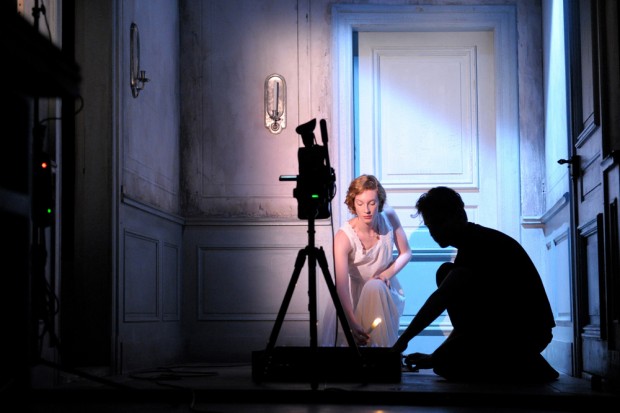 Most theatre directors produce work which is visually the same as everyone else’s. Not Katie Mitchell. Her plays are always brilliantly acted, highly atmospheric and often use film media in an amazing way. But she almost never works in this country any more. Scorned by the National Theatre, by the myopic critics (although loved by audiences), she now works mainly abroad. This production, first staged at the Schaubühne theatre in Berlin, is a perfect example of her genius.

In August Strindberg’s Fröken Julie, written in 1888, the set is the kitchen of a country mansion, where on Midsummer’s Eve the daughter of the house, Miss Julie, has a sexual encounter with Jean, a servant. Yes, it’s that familiar brew of sex, class and madness. Although he is already engaged to Kristin, another servant, Jean and Julie plan to run away together, but after a night of febrile passion, the cold light of reality comes with the dawn.

One of the pioneering naturalistic plays of European culture, this is a classic that attracts experimental directors keen to adapt the story like ripe meat attracts flies. At the moment, Londoners can enjoy the South African Yeal Farber’s take on the story in Mies Julie at the Riverside Studios, and now here comes a German version. Mitchell’s approach is daring: her aim is be as radical today as Strindberg was in his day. So Mitchell deconstructs the original play: she reimagines the story through Kristin’s eyes. A cook of few words, she is given a voice in this adaptation — written by Mitchell — which uses real-time filming to explore the drama. This means that the stage is divided into a lower level where the actors and crew act and film each other, and an upper level where we can watch the resulting film.

This approach creates a radically new experience. Instead of a play about a mismatched couple, the posh girl and the bad boy, this becomes a film about a lonely servant, whose life is a series of hard tasks and whose existential thoughts are bound by quotidian work. Kristin prepares a meal of kidney for Jean; she winds up the clock; she tests the sharpness of a knife. It’s women’s work, unglamorous, often tedious, but comforting in its familiarity. By following Kristin, we lose sight of Julie and Jean for most of the 75-minute show. In perhaps the most exciting scene, Kristen wakes up at night and hears their voices in the room below. Taking a glass, she amplifies the sound and their muffled dialogue suddenly becomes clear. Likewise, the video close ups allow us to see the facial expressions of the actors in a hyper realistic way. Every line is visible.

The claustrophobic atmosphere of the relationships of the play come across with a rare power, and seeing the filming work by the cast and crew (a technique that Mitchell has developed in several plays since she pioneered it in her groundbreaking Waves in 2006) illustrates the modernist idea that reality is made up of fragments. Also vital to the beguiling atmosphere of the piece is the cello playing of Chloe Miller and the hyper-realistic sound effects — scratching, wooshing and clunking — produced by the crew to accompany the filming. Co-directed by Mitchell and Leo Warner, who is responsible for the video filming, the performances of Jule Böwe as Kristin, Luise Wolfram as Julie and Tilman Strauss as Jean are pitched perfectly, restrained yet convincing. The quietly slow pace is reminiscent of Tarkovsky, there is very little dialogue, but this version puts you right in that countryhouse kitchen — it’s a uniquely intense experience.

This review first appeared on The Arts Desk, 30 April 2013