The Djinns of Eidgah, Royal Court 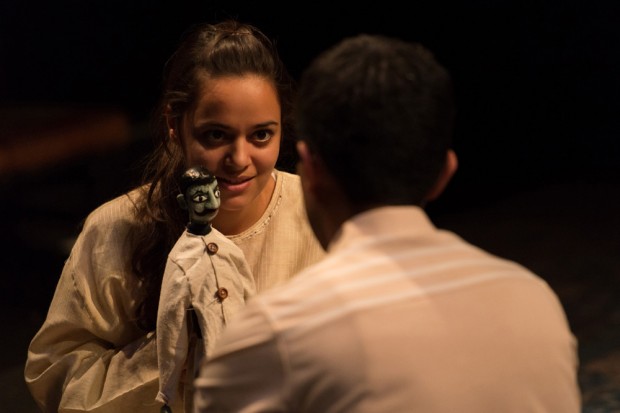 The Royal Court is justly proud of being the home of British new writing, but it is also a venue which has a great tradition of staging work from abroad. From bringing Bertolt Brecht and Samuel Beckett here in the 1950s to its more recent international summer schools, this is a place where you might make the acquaintance of Eastern European, Latin American or Russian playwrights. Now, following in the footsteps of Chennai-based Anupama Chandrasekhar, whose play Disconnect was here in 2010, comes another Indian talent.

Abhishek Majumdar’s Royal Court debut is set in Kashmir. It is just before the Muslim festival of Eid, and the play looks at the lives of two orphaned siblings: Bilal is a teenage football player who hopes to be picked for a national side; his younger sister Ashrafi is a traumatised, troubled girl who has never recovered from the death of her parents. She uses a doll to help her to communicate. Trying to treat her is Dr Baig, a psychologist. But what starts as a simple domestic drama soon grows into a much bigger story.

The conflict in Kashmir between the militant freedom fighters and the huge occupying Indian army affects everybody. Bilal just wants to play football, but his team mates put pressure on him to join in anti-government demonstrations. Likewise, Baig comes into conflict with the younger Dr Wani, his assistant and former student, who supports the protestors. Baig’s son, a freedom fighter, has died and older man’s attitude to resistance is bitterly critical. To balance the anguish of the Kashmiris, Majumdar includes the story of two Indian army soldiers, reluctant occupiers.

Placed over these human situations, like the gauze which covers the traverse stage at the start of the evening, is the spirit world. The djinns of the title are, in Muslim legend, spirits who can move among us in human form. The eidgah is a holy place, where martyrs are buried and prayers are said. Developed as part of a project along with Rage Productions Mumbai in 2010, which challenged 12 writers from all over India to write a play asking urgent questions about their changing country, the play is firmly rooted in time and place. The result is a dense and difficult play in which Majumdar, who lives in Bangalore and writes in English, Hindi, Urdu and Bangla, weaves Muslim stories and records the tales of occupation and resistance. While he gives Baig the most passionate speeches against political fanaticism, the sickening violence of the conflict grows increasingly excruciating and the evening ends in a bloodbath which is stunning in its sheer brutality.

The ugliness of the antagonism comes across without any compensating sentimentality. At times, I desperately wanted to leave, to block out the horror of a conflict that feels desperate and depressing. But I can’t really fault the truth of Majumdar’s writing nor the clarity of his vision. The mixture of brute facts and Muslim stories and prayers is powerfully effective, and Richard Twyman, who has already directed The Djinns of Eidgah in Mumbai, presents a helpfully trimmed text with an ace cast. Vincent Ebrahim is excellent as Baig, completely convincing with his expression that changes from weariness to justified outrage. Danny Ashok and Aysha Kala as Bilal and Ashrafi are attractive, which makes their troubles very painful to watch, and they lead a large strong ensemble. But be warned: it’s an exhausting, heavy, if also fascinating, evening.