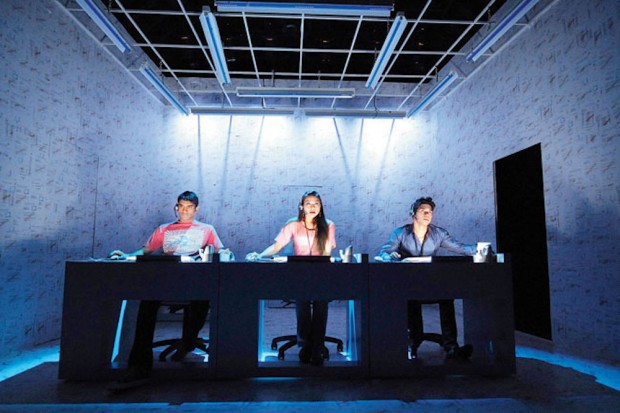 I’m not shy of moaning about the state of new writing. One of my pet complaints is that British playwrights are too constrained by writing what they know, and don’t set foot outside their comfort zones. Hence the relative paucity of British plays about other countries. Who fictionally travels to China, Brazil or New Zealand? Or India? But, in the globalised world, surely this is not good. Now, the Royal Court tacitly acknowledges this sad state of affairs by staging a new play by a Chennai-based writer. And it’s great.

In 2007, Anupama Chandrasekhar’s Free Outgoing, her London debut, explored the way that the new technologies impacted on personal relationships in Chennai. In her sympathetic new play, set in a call centre in the same place and staged in this venue’s upstairs studio space, she examines how the globalised economy exerts pressures on Indian workers to conform to Western stereotypes.

Welcome to BlitzTel, a call centre dedicated to collecting credit-card debt on behalf of a Buffalo-based finance company. Naturally, this means that its operatives — Ross, Giri and Vidya — have to do night shifts and assume fake American identities. Under the watchful eye of their supervisor, Avinash, the pressure is on to hit their collection targets. But what happens when these Indian workers begin to stray from the company scripts?

Although Chandrasekhar only shows us the Indian side of this global equation, her story evokes the world of the American Dream, where consumer goods are bought on credit, and debt is a normal part of life. But because Ross, Giri (Gary) and Vidya (Vicki) are trained to appear American, their identities are compromised when they also start believing in the same dream of unlimited materialism.

Indhu Rubasingham’s well-paced 90-minute production, with its claustrophobic set by John Napier, perfectly evokes the world of 10-hour shifts in a windowless workplace that has been built next to a rubbish dump. As the supervisor Avinash, Paul Bhattacharjee carries a convincing air of harassed responsibility while Nikesh Patel, making his professional debut, is excellent as the “supercollector” Ross. With great support from Ayesha Dharker as “Vicki”, Neet Mohan as “Gary”, plus Hasina Haque as a human resources officer, this is a rare, and engrossing, glimpse of the world economy from an Indian point of view.