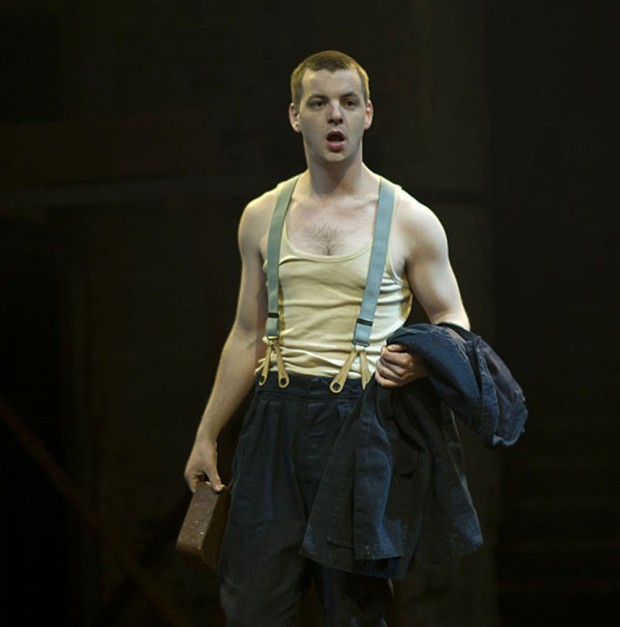 Dystopia is a genre that works like a rhetorical device. Take a government policy — let’s say the war in Afghanistan — then list the bad effects that this has had on the British people, exaggerate by a factor of ten, or more, add some obscure but sinister language, extrapolate by throwing in some nightmarish horrors, and then wrap it all up for a small cast. If you’re lucky, as Beth Steel has been with her debut play which opened tonight at the Old Vic Tunnels, you’ll get a really atmospheric venue, and, in her case, Kevin Spacey sitting in the first-night audience.

The Old Vic Tunnels are located under Waterloo station, and you can find them by leaving the station through Exit One, taking a right down a long, narrow ramp and keeping your eyes peeled for the rather grim-looking Tunnel 228. It’s a new venue, acquired by Spacey’s Old Vic in February, and first impressions are enough to lower even the most boyant spirits. It’s a dark subterranean space, smelling of damp, with fetid pools and sickly lighting effects. In one archway, a dead hare hangs from a wire, in another an overgrown machine sits silently decaying. Weird scenes. It’s eerie, chilly, and I think I’ll give that portaloo a miss.

The big surprise is that the show, which was performed at the HighTide festival in Suffolk last month, is staged in a regular auditorium, complete with rows of seats and reasonable comfort (dampness apart). Although the thump of trains passing overhead soon loses its novel charm, the playing space is great and for Ditch has been designed by takis to evoke a settlement in the wilds of the Peak District in the not-so-distant future. While most of the country is under water, the fascist government has sent its sinister security forces to patrol the land for “illegals”.

In this remote outpost, the men are led by the grisly Burns (Danny Webb), whose son is fighting for King and Country somewhere on the other side of the world (well, Venezuela, actually — the conflict then, as now, is over oil). His small outfit comprises himself, the passionate Turner and Bug, a quiet Scot. The arrival of a newcomer, young James, allows introductions to be made both to the men and to the hardworking women who look after them: the strict 50-something Mrs Peel and young Megan. As they all await the longed-for Recovery, there’s much work to be done.

Life is hard, the livestock needs tending and a bare subsistence is eked out from the intractable soil, so there is not much fun to be had. The men get to rape the occasional illegal, but for the women there seems little on offer except endless graft. Although the arrival of James awakens something in Megan, very soon the great machine of geopolitics draws all of these hapless individuals into its gaping mouth.

Steel’s text is an evocative mix of farm metaphors, punchy dialogue and moments of dreamy wistfulness, but is better at conveying the fraught relationships between these six individuals than at convincing us about the world beyond the farm. Burn’s gradual disillusionment and growing need for drink, Mrs Peel’s stern command of Megan, Turner’s dream of a better life, the easygoing acquiescence of Bug and the callow uncertainty of James are confidently drawn. There are tender scenes, such as when James teaches Megan tactical hand signals, and comic ones, such as when Burns bets Mrs Peel that you can get four cups of tea rather than three from one teabag.

Richard Twyman’s production exploits some of the atmosphere of this gloomy netherworld, and adds a few fearsome sound effects. The set is more successful at evoking the claustrophobia of this outpost, with its earthy floor and its ditch, than the wide open spaces of the surrounding hills. Although some of Steel’s storytelling is a bit erratic, the cast is thoroughly committed, with memorable performances from Sam Hazeldine’s powerful Turner, Gethin Anthony’s mild James, Dearbhla Molloy’s forceful Mrs Peel and Matti Houghton’s downtrodden Megan. Like most dystopias, however, this is a dark evening with few jokes and precious little hope.