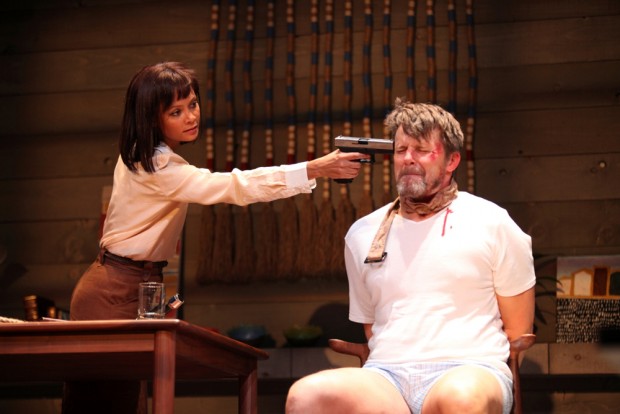 At the newly renamed Harold Pinter Theatre (formerly the Comedy), the inaugural show is a special tribute to the Nobel Prize-winning playwright, who died in 2008. The subject matter of Ariel Dorfman’s play, which won an Olivier Award on its first outing in 1991, is a powerful reminder that Pinter was a human rights activist. He was also a friend of Dorfman so this revival, which stars Thandie Newton and opened tonight, is an inspired choice of production.

Dorfman, who was born in Argentina and grew up in Chile, wrote his university thesis on the plays of Pinter, so when he created this play about political torture he drew on his own experiences of General Pinochet’s military coup d’état of 1973 in Chile and on the sense of the absurd in Pinter’s plays. The result is a psychologically ambiguous and morally troubling masterpiece.

Death and the Maiden is a three-hander that centres on Paulina, who was once a political prisoner and torture victim in an unnamed South American country, but who now lives peacefully with her husband, Gerardo, a human rights lawyer. The repressive regime has fallen, and he is investigating evidence to bring cases against torturers and human rights abusers. One night, on his way home, he gets a flat tire and a stranger, Dr Miranda, stops to help him. In return, Gerardo invites him to visit.

When Dr Miranda does so, Paulina — who was blindfolded during her rape and abuse — believes that she recognises him as her rapist. Could this be true? Or is she, as Gerardo suggests, just suffering from a delusion? For her, the only way to find out is to take Miranda captive and get him to confess. To Gerardo’s horror, this is what she does and the debate begins: is he guilty? Can you use torture to uncover the truth about other tortures? Do human rights abusers have no human rights?

Although Paulina discovers that Dr Miranda owns a recording of Schubert’s Death and the Maiden quartet — the same music that he used to play during his interrogations — her conviction of his guilt is highly subjective. On the other hand, there is something rather feeble in Gerardo’s insistence on the rule of law and due process. In this clash between a pragmatist male and an idealistic female, the main message is that the past has the power to destroy the present. If the repressive regime has failed to destroy this couple, then they might just be about to destroy themselves. The most dangerous political opponent is oneself.

For this is also a play about a marriage. From the start, the bickering of Gerardo and Paulina is instantly recognisable. But the relationship drifts dangerously close to the stereotypical: the man is duplicitous, but rational and reasonable; the woman is unstable, unpredictable and instinctive. In some passages, their relationship seems to be that of a doctor and a patient. For Dorfman, only love can cross the divide between them — some audience members might be less forgiving.

The play has a distinguished history: its original Royal Court production starred Juliet Stevenson and a film version was made by Roman Polanski in 1994. This time, all eyes are on Thandie Newton — who was big in Crash, Run, Fatboy, Run and Mission Impossible 2 — and here makes her West End debut. Certainly, the casting of a mixed-race actor in a contemporary classic is an excellent idea, and has gained some added relevance from the recent BBC documentaries about the subject. But is she right for the part?

The short answer is no. Newton’s voice is irritatingly chirpy and cheery, and her performance lacks the pain of experience and the depth of, well, character. Her sobs are as superficial as her shrugs; her passion is as bloodless as thin broth. When she talks dirty, it sounds like a schoolgirl taking a dare. There’s really no weight at all behind this acting. By contrast, Tom Goodman-Hill has a gruff conviction as Gerardo and Anthony Calf a ragged plausibility as Dr Miranda. Jeremy Herrin’s production has Peter McKintosh’s ugly set, whose most memorable feature is a grid-like screen that descends to obscure our view. Although Herrin emphasises the play’s ambiguity, especially at its ending, the poverty of his lead actor makes a beautifully constructed psychological thriller, if not exactly torture, surprisingly hard work to watch.