Daisy Pulls It Off, Park Theatre 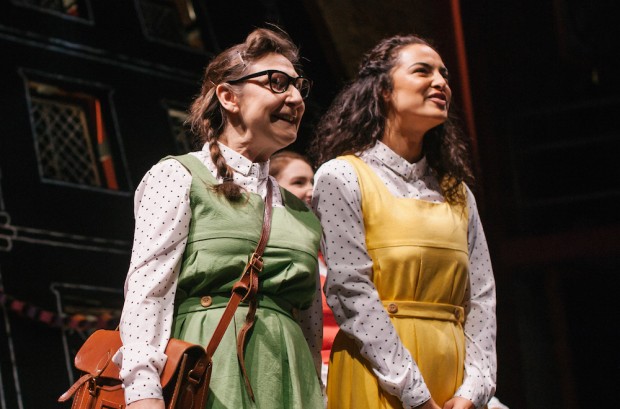 History is a good place to talk about our contemporary concerns. And British theatre loves plays that are set in the past. Some of the most popular shows in postwar theatre history do a bit of time-travel in order to make a point about the present. This energetic revival of Denise Deegan’s Daisy Pulls It Off, first staged in 1983, is a case in point. The original production was a big hit, running for 1180 performances in the West End. Now, with age-blind and diverse casting, and fielding actors familiar from the Harry Potter films, Hollyoaks, Father Ted, Coronation Street and EastEnders, this is a kind of Christmas show that prioritizes laughs and giggles over more serious messages.

Set in 1927, in Grangewood School for Girls, a classy boarding academy, the play is an affectionate parody of yesteryear’s teen magazines for girls, with their wizard wheezes and other japes, their jolly hockey sticks and midnight feasts, and their oppressive — toffish — social codes. The plot follows Daisy, the new scholarship girl from a modest background, as she has to stand up to the class prejudices of the other pupils. Her main antagonists are the snobbish Sybil and Monica, the class bullies, while her best friend is Trixie Martin. Together, our intrepid duo decide to solve the mystery of the Beaumont treasure, concealed somewhere in the country house school building. In the end, of course, Daisy wins over the girls, cracks a secret code to find the hidden treasure, rescues some girls from certain death — and saves the school honour when she scores the deciding goal in a hockey match.

The play is written as a parody, with a nod of a boater to the stories of Angela Brazil — who published some 50 books of girls’ boarding school tales in the first half of the 20th century — but it is also a feminist tribute to young women, who are represented here as independent, resourceful, brave and with a keen sense of justice and morality. Not only does the schoolgirl code disapprove of sneaking and telling tales, the plot also shows how even the most nasty of the girls are finally convinced to do the right thing (to own up). Justice, in the end, prevails — it is fiction, after all.

At the same time, this is a story about class, about a girl from an underprivileged background who is upwardly mobile due to her talents and ends up in a place that is almost another world to her. Daisy has to make her way in the hostile environment of class privilege, where the Grangewood school Latin motto “Honesta Quam Magna” (how great are noble things) belies the upper-class disparagement of the lower orders. In this school, the superiority of the upper classes and the inferiority of the common people is taken for granted, so Daisy has to work twice as hard to make her life a success. But, luckily, she is academically bright, gifted at music and displays great prowess on the playing field, where the slogan “Play up and play the game” reminds us that the myth of British fair play was born on the playing fields of public schools.

Although parody and satire work best with a straight face, this production by Paulette Randall hams up the acting and exaggerates the jokes in a roaring festival of slapstick and simply super schoolgirl slang from the 1920s. Designed by Libby Watson, the staging uses a handful of wooden chairs and mobile stairs under a massive blackboard, on which a picture of the school has been drawn in chalk and the black-and-white theme of the setting works well in underlining the morality of this tale, in which the low-class outsider turns out, as in a fairy tale, to be an upper-class gal after all. Anna Shaffer of Hollyoaks and Harry Potter fame, makes her stage debut as Daisy, and radiates both innocent charm and cool control at the centre of this energetic and often wildly overactive production.

Pauline McLynn, a Father Ted regular, plays Daisy’s chum Trixie with visible enthusiasm, while the rest of the cast run riot amid the howls of audience laughter. The snobs of the Upper Fourth are led by EastEnders’ Shobna Gulati as snobby Sybil and Clare Perkins as snooty Monica, while Lucy Eaton, Melanie Fullbrook and Freddie Hutchins each take on several of the remaining roles. At times, things threaten to get a bit out of control, but maybe this romping aspect of the show will appeal to the paying public. Although the parody is played for exaggerated laughs, the show is a reminder that, when they represent class conflict, the 1980s plays of the Thatcher era often pack a powerful punch. In our own age of stalled social mobility, even a production that doesn’t quite pull it off has much to say about disadvantage and meritocracy.