Home » Blog » About The School for Scandal

About The School for Scandal 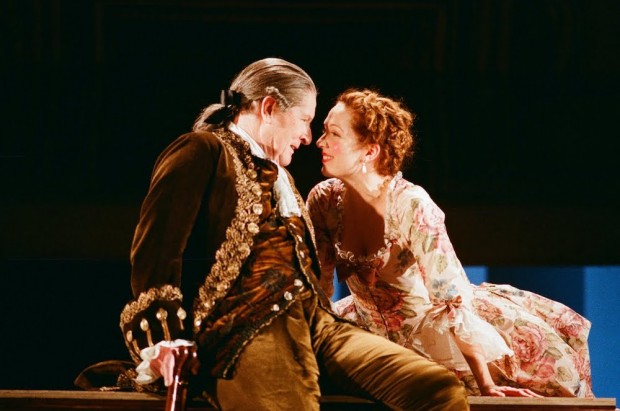 Yesterday, I was at the Barbican to see a matinee: Deborah Warner’s eagerly awaited version of Richard Brinsley Sheridan’s 1777 play, The School for Scandal. It made me think how in today’s culture everything has to be relevant. Any work of art that is simply excellent doesn’t make the grade. It has to say something to us; it has to be of the moment. And this is where this production falters. It begins okay with a long prelude as the audience troops in. On stage, the cast warm up by strutting to the fore, girating to dance music and holding up Brechtian placards describing the caddishness of the characters. It’s an exciting start, but then the play itself arrives. Warner quietly and subversively underlines the relevance of Sheridan’s tale of the dictates of fashion and of hypocrisy unmasked by planting numerous reminders of today within this 18th-century play: mobile phones, lines of coke and even a tin of Quality Street chocolates. But the play, which is meant to be a comedy, simply isn’t very funny. No one in the audience laughs. Despite a handful of good performances from a cast headed by Alan Howard and Katherine Parkinson, the play lumbers depressingly across the stage, its ideas much more appealing and stimulating than the interactions between the actors. It all feels very slow and cumbersome. What’s missing is the sheer sense of fun of the original, and it’s lightness of touch. So much for relevance.