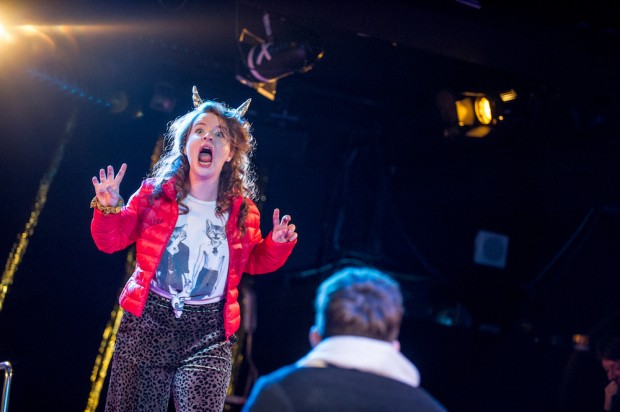 Iona is not having a good day. She’s a super talkative Dublin teen who desperately wants to be part of the cool crowd, to go to their parties, to drink with them, to dance with them. But there’s a problem: they all hate her. At school, she is bullied and ignored by Toller, an energetic raver who was her best friend in primary, but who now prefers to move with the big boys. So Iona feels like an outsider, her only friend being the strangely attired and genderqueer Pingu, who communicates without speaking: they are the school losers. Everyone despises them. Fed up with being picked on, Iona and Pingu hatch a daring plan: to emigrate to London and start a new life.

Lisa Carroll’s debut play begins with a blaze of anger as Iona and Pingu are excluded from one of Toller’s parties, and find themselves in the street, gnashing their teeth in shame and frustration. But their troubles are just beginning: when news gets out that they intend to leave Crumlin, a place of council estates where the job prospects are summed up as “taxi driver, hair dresser or drug dealer”, suddenly the cool kids — Toller, Trix and Pockets — become interested in them. Especially the boys Trix and Pockets. And especially in Iona. But while she is bowled over by the attentions of the two guys, Pingu can see the danger — they don’t really like her and this is all a cruel game. But, for a while, Ioan is on cloud nine, enjoying her moment as a local celebrity. It’s clear that this moment won’t last.

This is a story of teen friendship, peer pressure and evil-minded cruelty. When Trix and Pockets suddenly begin to get interested in Iona, there’s a real sensation that something very bad is going to happen. After all, you can see, as Ioan can’t, that these two are just playing with her, messing with her emotions and leading her on. Pockets, in particular, has an edge that could turn psychopathic at any moment. In the hothouse atmosphere of teen anxiety, there’s a distinctive pong of morbid dread. By contrast, the friendship between Iona and Pingu has a warmth and depth that is heartening, even when the fragility of this relationship is cruelly exposed.

Iona’s rather childish view of the world is symbolized by her instant love of Pockets’s pet hamster, Benny, and by her naive desire to accept almost anything the cool kids say to her. She is so star-struck by these local mini-celebrities that she is unable to grasp the painful truth about her life: that is is only safe as half of the school’s odd couple (chatty Iona and mute Pingu). Her illusion that she could find her estranged father in London is typical of her childlike state, also illustrated by her thumb sucking, but the play also shows how she is able to take some faltering steps in her need to assert her own identity.

Carroll writes with an appealing freshness, and her evocation of teen life in Dublin is detailed and contemporary. There are references to local hero Conor McGregor, a boxer whose green Lamborghini is an object of fascination, as well as jokes which name-check Pharrell Williams and Kim Kardashian. There’s plenty of obsession with celebrity and wearing the right trainers. As well as a massive appetite for chicken nuggets and chips, whose smell tellingly hangs in the air. And there’s also a distinctly Irish view of Brexit when the cool kids parody the current political crisis by talking about Crexit, the desire to leave Crumlin. Amidst the snappy dialogue, with phrases such as “Emigration is giving me hunger pangs” and “Face on her like a bag of spiders”, there’s a distinct note of sadness in this cautionary tale about the dangers of drink and bad company.

What’s particularly striking is how deeply felt this play is. Cuckoo has a flood of feelings which quickly burst the banks of decorum, pouring out all raw and spontaneous, sloshing around your mind and splashing around your ankles in a show that runs for almost two hours without a break. It’s an emotional whirlpool. There’s an excruciatingly embarrassing sex scene which flays the feelings further, reminding us how exposed we all are as teenagers, and how near the surface all our fears and failures can be. There’s also a disturbing sense of male aggression, exemplified by the use of the slang phrase “smash her” for the sex act, and by the strutting machismo of the nervous teens, who don’t feel anything like as confident as they look.

Shortlisted for the Papatango New Writing Prize, Carroll’s sharp and well-observed debut is produced by Metal Rabbit in the Soho’s upstairs studio space, which is dedicated to showcasing new talent. But, however impressive, the play is not faultless. Carroll has come up with a good story, and she gives it vivid life through her dialogues, but she hasn’t quite found a compelling enough theatrical form for her narrative. Added to this, director Debbie Hannan’s production, on Basia Binkowska’s utilitarian set (which comes alive in the clubbing sequences), is often slack and rather unfocused. Still, the central performances are well developed: Caitriona Ennis plays Iona as a frantic motormouth in search of a sympathetic ear, while Elise Heaven’s silent Pingu finds expression through a repertoire of shrugs, slinks and shuffles. Sade Malone’s Toller is an energetic dancer and convincing bully, well supported by Colin Campbell (sinister Pockets) and Peter Newington (brazen Trix). Although the story closes on an inconclusive note, Cuckoo provides ample evidence of a youthful new voice.