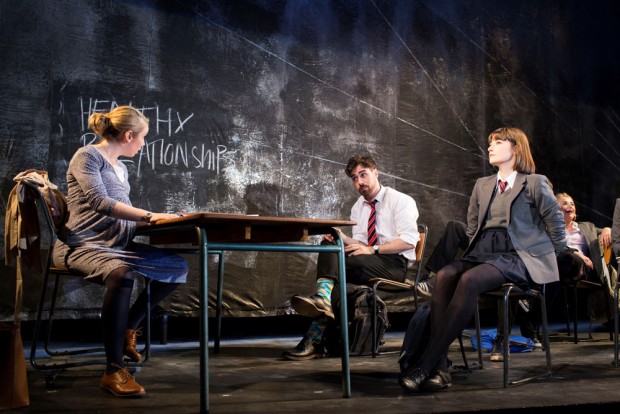 The sexual urges of teenagers are obvious, but less well known is their desire to be loved. Right at the start of Evan Placey’s new play about an illicit relationship between a 22-year-old female teacher and a 15-year-old male pupil, the pupil says that he knows that he radiates neediness, “Like one of them manky wet foxes you’d find by the bins, staring up at you, longing in their eyes.” It’s a fierce image, exactly right for this powerful and disturbing play.

By switching the usual gender roles, Consensual examines sexual desire, emotional need and the role of teachers in a story that centres on teacher Diane and pupil Freddy. In the first half of the play, we meet Diane at the age of 29, a Year 11 teacher who lives with Pete, a tax inspector, and is pregnant with her second child. It’s been seven years since she last saw Freddy, who seeks her out to tell her that he has made a complaint to the police about her seduction of him when he was an underage and vulnerable boy.

But what exactly happened on that rainy night seven years ago? When Diane tells Pete about it, she claims not to remember. She was very drunk and insists that when Freddy came to her flat in the middle of the night they didn’t have sex. Yet when Freddy confronts Pete about the incident it is clear that he has seen Diane naked, and, moreover, he says that he is the father of the couple’s first child. Slowly the disturbing notion of rape — which has also recently featured in Gary Owen’s Violence and Son and James Fritz’s Four Minutes Twelve Seconds — slinks into view. But who raped whom? Is it Diane or Freddy?

To discuss these issues, and many more about consent and sexuality, Placey introduces a series of scenes set in Diane’s classroom, where she is teaching the kids about “Healthy Relationships”. Two additional subplots show the story of Mary, a 23-year-old pastoral assistant, and her failed mentoring of Georgia, a sassy 15-year-old, and also explore the relationship of Freddy and his older brother Jake. This last scene is revealing because it turns out that Jake has a very clear memory of what happened on that night when Freddy visited Diane’s house.

The play is well structured and full of strong lines. Placey’s dialogues are devoted to exploring themes rather than character, but if you forgive this functional approach then the story is full of insights and ideal for students, especially if they know what the word “fletching” means (apart from archery). There is material here about grooming, about sexual experimentation and about bad sex. Diane’s image of the students as suicidal timebombs, “over-wanked fuses and pornified nitroglycerine threatening to detonate at any moment” exemplifies the pessimism of the play’s vision, a saddening fact intensified by the punishments meted out to both Mary and Diane. Overall, the evening articulates our anxieties about teenage sexuality and its consequences.

This production, by the National Youth Theatre REP Company (which since 2012 offers young people bursaries to train as actors), is part of a 10-week repertory season in the West End. Directed with vigour by Pia Furtado, the excellent 16-strong cast dance and rap during the scene changes and give a good sense of classroom anarchy in this contemporary blackboard jungle, designed by Cecilia Carey. Lauren Lyle is outstanding as Diane, and she gets good support from Oscar Porter-Brentford as the troubled Freddy, Conor Neaves (Pete), Cole Edwards (Jake), Megan Parkinson (Mary) and Grace Surey (Georgia). This challenging, demanding and haunting story might not surprise anyone who has brought up a teenager, but it does put into question the role and behaviour of teachers.